Ya Kun Kaya Toast is everywhere in Singapore. As one of the oldest, they have even expanding themselves in other Asian countries, including Indonesia as well. One time, I enjoyed my brunch having the kaya toast and a cup of hot black coffee back in Bandung.

But how does it feel to have it at the origin country itself? It’s an experience that I have to try myself. 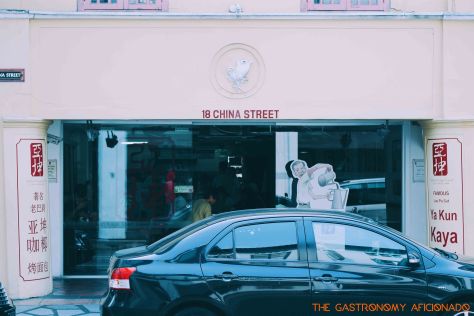 Staying at AMOY on Telok Ayer Street during my last visit to Singapore was a great experience. Not only that I witnessed firsthand at how the old heritage can live side by side peacefully with the modern Singapore, but I got to stay at an extremely pleasant hotel with a rich selections of food around the neighborhood.

Ya Kun Kaya Toast at 18 China Street is the first one that started it all. As the jewel of the Lau Pa Sat region here, people are flocking since early morning for breakfast and even in weekends. China Street itself lies in the heart of Singapore’s CBD and it is quite surprising to find a lot of people around on holiday.

We were seated and service was quick and helpful. Courtesy is not to be expected – which typically a Singaporean character, but if your breakfast come in early and right, you won’t have any complaints about that.

Due to the speedy nature of everything, breakfast was confined only to two set menus – it’s either kaya toast or French toast with coffee/tea and soft boiled eggs. Perhaps the menu will be more complete in the afternoon or night, but then again, due to so many people around, it was arguably the management decision to limit the menu.

For a very affordable breakfast like this and quite fulfilling apparently, I was thoroughly pleased. It’s good to actually eat in a pleasant surroundings, swift service, and quite hearty (for an Indonesian like me who prefers bubur ayam or nasi uduk in the morning).

The eggs were good with a bit of soy sauce and peppers and the milk coffee worked just right. The bread was perfectly toasted, crisp, and works really nicely with the butter and the kaya spread. I decided to bring back a bottle, but from Mustafa apparently. However, thanks to Ya Kun for the motivation!

It’s another good round of kaya toast breakfast like last time when I visited Tong Ah in Chinatown. I think I can enjoy more of breakfast like this, setting aside rice once in a while.

A good delicatessen would excite anyone in Jakarta nowadays. With the coffee culture growing strong now, all that’s left is to actually pair it with great deli food from the simplest form of pasta and up to the most hearty sandwiches.

Every hotel usually owns their own cafe or deli somewhere, but for Fairmont Hotel Jakarta; they have allocated a great space for its newly opened Sapori deli. Sleek, homey, and has so much to offer; it was exciting to be among the early witnesses of the inception of this very Italian-style deli.

Separated into two lengthy sections, Sapori Deli might be the biggest deli in a five-star hotel in Jakarta. Not only that the deli serves fresh bakery, cannoli, and sandwiches; be prepared to be awed by their fresh options of pizza, pasta, and also other Italian snacks such as grissini and biscotti.

The sandwiches are, of course, the main theme in Sapori Deli. I have gone to the length of enjoying so many flavors of it from their luscious homemade meatballs, eggplant parmigiana, crab salad, duck ham, and also the crowned champion – chicken confit. How pleasing it was! 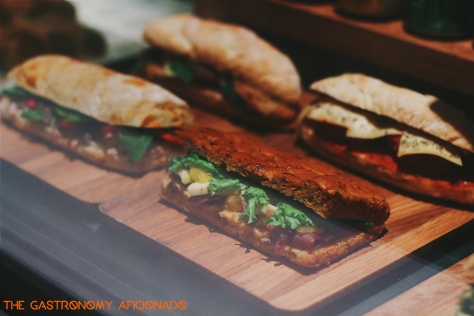 In this occasion, I was also graced by the opportunity to learn about how to make pizza. While the dough has been prepared beforehand, the toughest part is still yet to come. Seeing the pizza makers whirling and twirling the dough or even the guys from martabak telor vendors is fun, but not easy at all apparently!

Lucky for us, the master of Sapori Deli – Chef Gozali, taught us how to do it and that we should appreciate the skills in equal to the taste itself.

As a chef once working for a Michelin-starred restaurant in Macau, it’s an easy affair for Chef Gozali with his pizza. Crisp on the crust, airy yet felt nice chewing it, and that came from a single margherita pizza!

What about the rest? Well, I did my part with my self-made vegetarian pizza and I was proud of myself (actually, credit should be given more to Chef Gozali and his baking crews there!). Happy to indulge my family back home with it.

Even from a single deli, there’s so much to see nowadays. Under Executive Chef Andrew Zarzosa’s hands, Sapori Deli gives out an adventure of its own for us as the early visitors of it. Aside from the fancy sandwiches and everything, I was also impressed at how their zappole can taste so good. The pistacchio filling I had was luscious and creamy, but I love the vanilla even better!

Looking forward to be back here again someday and other luxurious outlets that Fairmont Hotel Jakarta has to offer. I bet it would be a great escape for foodies out there by coming to this hotel and see what it has to offer.

SAPORI DELI
Not halal-certified (serves alcohol, some dishes contain pork)
Some dishes are suitable for vegetarians 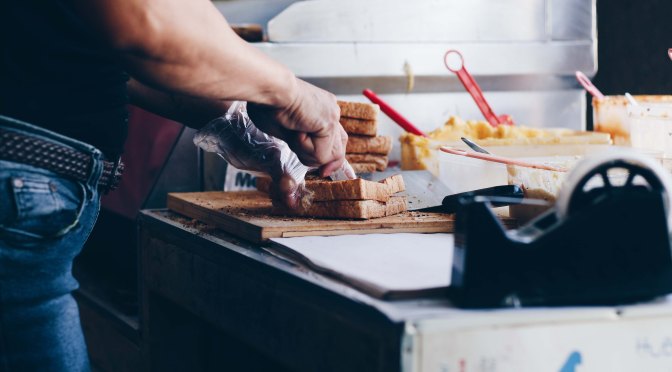 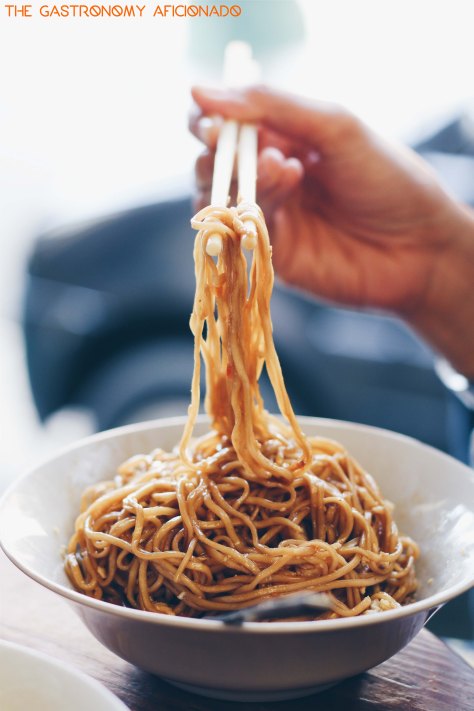 ROTI GEMPOL
Halal-friendly
Some dishes are suitable for vegetarians

Let us meet Maison Weiner, a dear friend from the past and a hidden pastry shop waiting to be rediscovered again.

Perhaps only the grandparents know how different it was back then the landscape of Senen during the colonial era and the early age of the republic, if compared to now. As can be seen from historic archives, Senen used to host sprouting businesses of many kinds and up until now, it hosts also one of the most important train stations in Jakarta.

From the archives you can see the old automobiles or even muscle cars were passing through the healthier generation of that day who took cycling or walking more seriously than us now. It was also the time when Jakarta still has its tram network and that’s something that even I really want to see like a lot as it is nowhere to be found anymore in any Indonesian cities.

Meanwhile, somewhere nearby the famed and busy intersection of Senen, let’s head a bit inside the Kramat neighborhood where you can still find old buildings and colonial-style homes. Among them, surely you cannot miss Maison Weiner, an old timer in pastry business since 1936.

In actual, you will also find in many cities across Java that there will always be similar businesses that still retain its conservative design and the authenticity of the recipes. Old restaurants, bakeries, or ice cream parlors are mostly owned by Indonesian Chinese and some did inherit the business from their Dutch employers in the past. That makes me proud to see that they’re still up for the challenge even until this day and to always stay true with the original design.

While many people seem to not remember this place anymore, I was intrigued after so many times passing through this street. It is obvious for my foodie eyes that this cake shop is waiting to be rediscovered again and the time finally came for us all.

Maison Weiner or previously known as Bengkel Koewe Weiner, is now under the care of the third generation from the direct line of Mrs Lee Liang Mey. The business has seen its ups and downs for many decades and is still now can be considered as a classic choice on where to buy pastries that came from old Dutch recipes.

So if you happen to drop by here, be sure to not miss their saucijzenbroodje or more known as saucijs brood. It can be easily found in many classic pastry shops but to try from each one of them is a must experience for myself. While saucijs brood is a puff pastry filled with meat, there’s also another version filled with peanuts and sweet syrup called amandel brood. However the most recommended one would be to have their onbijtkoek or a rectangular, spongy cake with cinnamon, peanuts, and raisins as the main elements.

Additionally, the must-try cake from Maison Weiner that is still commonly found nowadays is the rollade that came in with different flavors and fillings. On the bread display, you can see also so many creations that you would find in modern bakeries inside malls but certainly, you may not want to miss the original design that apparently came all from the influences of the Dutch and the current owner’s knowledge in modern pastries.

There’s always a certain satisfaction upon finding a hidden yet classic establishment like Maison Weiner for me personally. Although as a shop it might not be considered a real institution anymore but if we were true foodies, surely we’ll put up an effort to appreciate more of its history and the originality that it has to offer for us all until this day.

Therefore, if it pleases you, I would like to re-introduce you again with our dear Maison Weiner. Enjoy your stay there.

MAISON WEINER
Halal-friendly
Some menu are suitable for vegetarians