Bara “The Supercook” shares FOODIES his words of wisdom from his many years of hardships and achievements.

The internet universe of today is more resourceful than ever and it is now easy for anyone to excel at something at a much quicker rate, more than what we used to know. In the ever evolving culinary world, a plethora of celebrity chefs out there are showcasing their skills in such amazing and undiscovered ways, unknown to anyone before.

This in turn helps people who are actually aspiring to become professionals in the F&B industry. However, in light of these privileges that we have today, would people rather use the easy way to achieve their dreams or to actually explore their aspirations by means of the harsh, old ways?

Bara Pattiradjawane is the latter, self-taught breed. He learned the hard way since the time when these privileges never existed before. His inspirations purely came from his love of grandparents’ cookery skills – something that he never thought would drive him to this occupation.

Living his days of youth in The Netherlands with his migrating grandmother, Bara was not only exposed to European food cultures but also to a sense of nationalism as well. He recalls the moment when his grandmother cooked every day for the whole family, “It seemed easy for me back then. Grandma put all the ingredients in and then finished. We then gathered on the dining table to eat together with the rest of the family.”

Among the most memorable dishes that his grandmother used to cook for him was the lamb chop rica-rica. “Despite her many years abroad, she never forgot her homeland. Her stories about Indonesian food and cultures were, unconsciously, the foundation that made me who I am today”, says the Supercook. 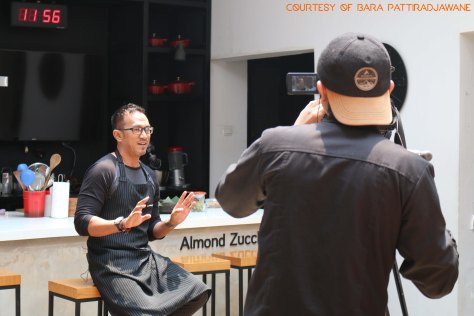 Bara would say that his development as a full-fledged man of the kitchen has been very natural. His love for cooking grew from a mere hobby but with no expectations that he would one day enter the career professionally. During all those years, Bara traveled all over Europe in search of inspirations and self-teaching himself through new and used cookbooks that he bought during those journeys.

Even so, his academic background and early occupations actually had nothing to do whatsoever with cooking. When he finally returned to Indonesia in the early 90s and spent several years working in different industries. However, only in the year of 1995 that Bara finally decided to become a professional.

“Rejections were commonplace for me during those years. They would say that I am unfit for the role or that food was not an interesting subject for them”, he smiles widely, proving that the errors were worth the experience and that now he shows them all that he can make it.

After years of brilliant career as a TV presenter through his memorable “Gula-Gula” show for eight seasons, many hours of cooking demos, four cookbooks, and his own Youtube-endorsed channel “Bara Supercook” now; it is finally time for the chef to share his love for Indonesian food.

“Never underestimate Indonesian food. It took me a lot of time to learn about it and it’s all about how to balance these rich spices and ingredients for the right harmony”, explains the chef.

Even so, he laments the fact that people nowadays are more into foreign food. “Like one time when I became a jury in one of those cooking competitions. The kids as the participants of the competition told me that they wanted to rather learn European cuisines and said to me that Indonesian food did not interest them because of the difficulty.”

“And then I said to them, ‘It’s okay for you to learn about their food but always remember where you came from no matter what. We have brown eyes and black hair, but we will still be nobody even if we’re good with their cuisines. But if you show yourselves that you are good with Indonesian cuisines, that is something’”, spirited as he says this.

Bara is now more grateful than ever, especially with the official release of his latest cookbook at Frankfurt Book Fair late in 2015 and his current role to promote Maluku cuisine.

“I was appointed by the city of Ambon as their culinary ambassador. My plan is to introduce Maluku cuisine to everybody here in Indonesia. Something that even many chefs here don’t know much about”, tells Bara.

Last but not least, Bara shares us his wise words after having the ups and downs working professionally for food for the past 21 years now.

“Never think that it’s all about fame and luxury by being in the television. It’s all about hardships. The kitchen is a tough place to work, even if my shows were shot by the sea or at Mount Bromo”, shares Bara. “It’s not all about getting into the television one time and already you start telling everybody that you are a real chef while you’re only a recent graduate of a cooking school. Please stay humble, prove your creativity and hard work, and don’t forget our roots once again with the Indonesian food.”