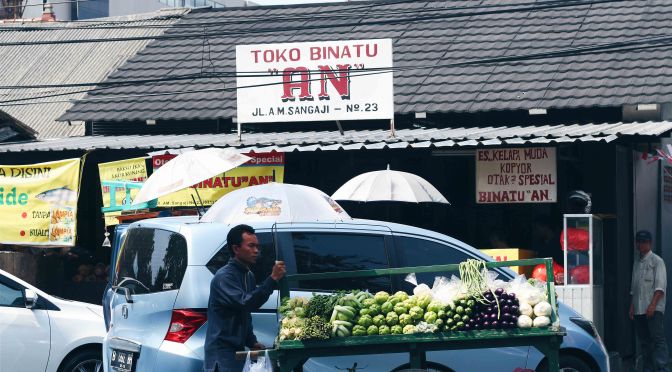 While otak-otak is an ubiquitous snack which can be easily found in many corners of Jakarta, paying an homage to one of the oldest proponents of this particular delicacy is a journey that any foodie must undertake at least once in a lifetime. Therefore, allow us to lead you to Otak-Otak Binatu “AN” for that.

Adhering to the principles of diversification with prudence and discipline could be the best decision ever made when it comes to business. Of course, there’s always a downside of not putting the eggs in one basket. You will have to spend more time maintaining everything so that your businesses will all work just fine.

That’s when a certain laundry or binatu in Roxy neighborhood of Jakarta decided to include selling otak-otak and iced coconut water as their side business years ago. With what I said earlier about prudence, the family who owns the laundry apparently since the early stage of their otak-otak business decided to emphasize the aspects of quality as well.

Therefore in time, people started to recognize the superiority of their otak-otak that suits well with a huge mug filled with young, fresh coconut flesh and water. The rest is history. The otak-otak business has become so successful so that the owners wanted to concentrate more with the food business rather than the old one. Even so, they retain the old laundry’s name wherever they go.

So what is actually so special about their otak-otak? First of all, we should not compare this to any random otak-otak sold on bicycle vendors under the pedestrian bridges in Sudirman.

Almost reaching their sixth decade journey now, Otak-Otak Binatu “AN” formulate how to harmonize the strength of mackerel and the natural spices better than anyone in the business. The mixture of fish and spices are then coated thinly with the starch so that the mackerel’s taste is still the main cast of the ensemble.

Wrapped in moderate size with banana leaves, the crews grill the otak-otak perpetually from time to time so that if anyone orders, the otak-otak is ready to be served hot. While personally I found that I had better peanut sauce better somewhere else, it is nevertheless still served well as a good dipping sauce for the otak-otak.

The consistency of the otak-otak here is almost like a gel but it has that mild chewiness that I like a lot, a careful amount of spices which makes everything feels in harmony, nicely grilled, juicy, and also expensive at the same time. For IDR 9,000 per piece, this might well be counted among the most pricy snacks, almost on par with Batagor Kingsley in Bandung.

Other than that, Otak-Otak Binatu “AN” serves other worthy delicacies for you to try. One among the most recommended is the bakso ikan, or the fish meatballs served with soup and noodles. Having a lunch here or even snacking on a hot day of summer would be the best experience of all, especially when you’re having their famed coconut water with that!

Well, what are you waiting for now? Do come and try!