Ah Nishimura. One of my best bet for Japanese food in Jakarta. As a franchise Japanese restaurant exclusively attached to Shangri-La hotels in Indonesia, there’s of course, a certain degree that must be kept in order to keep the standard high.

For all the course of my visit over the years, what Nishimura has to offer from time to time never fails me personally. As an all-rounder in Japanese cuisine, Nishimura has brought me on a trip to taste their wonders in teppanyaki, sushi and sashimi, and many other things. This time it’s about the shabu shabu.

Truly, there’s more than just shabu shabu to start our night at Nishimura that time. We traverse a bit to the world of appetizers coming from two different extremes. The first one is the five kinds sashimi which easily differentiates the quality of Nishimura even among its peers or not to mention, the competitors out there from different segmentation. It was divine!

The other one is the mochi with a huge cut of ichigo inside and a little bit of ogura. It was nice but rather too sticky. Would definitely enjoy it more with ice cream. But well, it was an opener and I asked too much already, eh? 😀 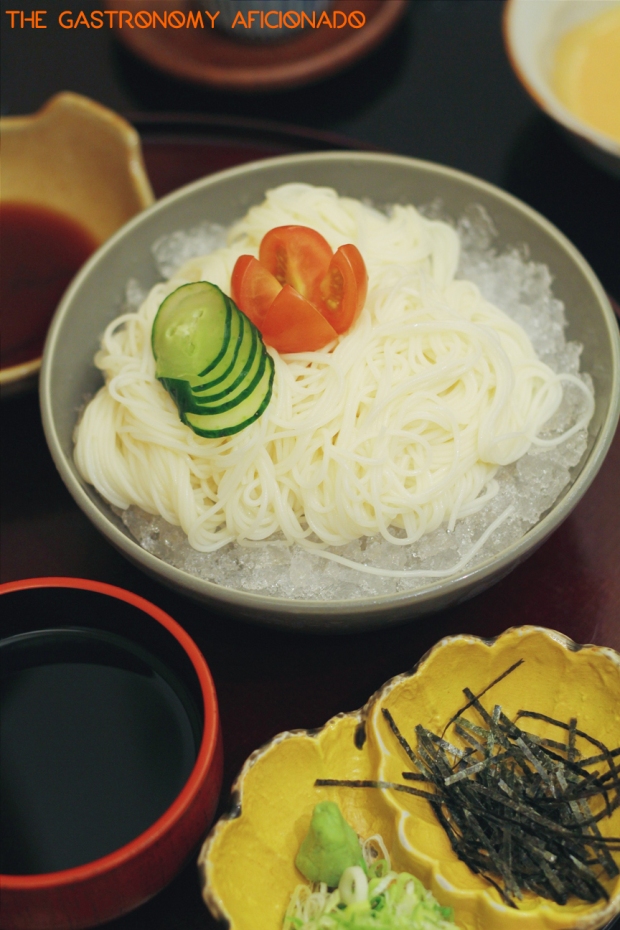 Even though it’s already at night and the weather was considerably not that hot, it’s always a good time to taste both cold soumen and cha soba. The latter has always been my wife’s favorite, in contrast with my white and slim noodles. I think we both remain indifferent about this but agree to one point that both of these fantastic noodles were highly enjoyable. 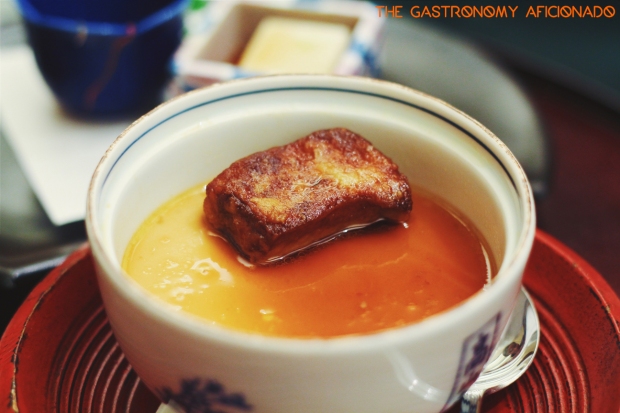 In the meantime, the luscious foie gras chawanmushi arrives and that was my first time having a chawanmushi luxuriously. It may not be for the purists or traditionalists, but I am always open to new adventures when it comes to Japanese food.

And then comes the mighty shabu shabu!

The first note that I received that day was that the shabu shabu in Nishimura is the classical type. It can be seen from the clear soup with a subtle taste of the stock. Basically it was not meant to overpower the protein and the vegetables we put inside.

The sauces provided separately would be for the dipping and that’s where the actual savory taste came from. It matters a lot to us Indonesians but again, if you are a purists, then the shabu shabu here is divine!

The rest is pretty much a walk in the park. Fresh vegetables, generous slicing of beef, and an additional of garlic fried rice for me brought the whole night as one of the best in recent years. Great food, good laughter, and wonderful companies are what you need from time to time.

NISHIMURA
Not halal-certified
Some menu suitable for vegetarians