Finally, our trail to seek good coffee led us to meet Widyapratama, a philosopher and a master roaster behind the success of Kopi Aroma.

The antiquated marble sign says “Aroma – Paberik Kopi”. Even without the knowledge of Kopi Aroma’s historic stature, we will all be convinced that it came from decades ago.

Take a look at the archaic art deco font. It was a sight you will rarely encounter anymore in this country. On the bottom of it, the word “paberik” signified that it came from old Indonesian spelling.

The marble sign, which was quite recently renewed, made everything looked charming again despite Kopi Aroma’s decaying exterior paintwork. It was enough to convey Kopi Aroma’s authority as an 85 year old coffee roaster, the darling of Bandung coffee lovers with a nationwide reputation.

The roaster survives and flourishes throughout years of competition and tribulation under the adept hands of its owners. Now it is running in full capacity under the leadership of Mr Widyapratama as the second generation owner.

Business seemed good with the long queue of caffeine lovers waiting for their share of good coffee out front. They each were waiting for Kopi Aroma’s coffee-filled retro-look paper bags with old Bahasa inscriptions on it with an instruction for customers on how to store the coffee well. These wonderful white bags have also apparently reached the shores of famous supermarkets outside of Bandung.

After being escorted by one of his daughters, Pak Widya fetched us right at the entrance of his warehouse. He greeted us and appeared relaxed in his brown safari shirt, the same uniform like everybody who works here. In contrast with his stout-looking workers, Pak Widya is a man in his 60s with a scrawny figure but has this wide, honest smile that emits good health and high spirit.

He’s not only an experienced coffee roaster, but also a lecturer for Padjadjaran University and an active board member of a renowned school in Bandung. “Morning is for work and nighttime is for sleeping. Don’t do the opposite like youngsters nowadays”, he said as a man who spends every day since very early until evening as a business owner and a teacher. 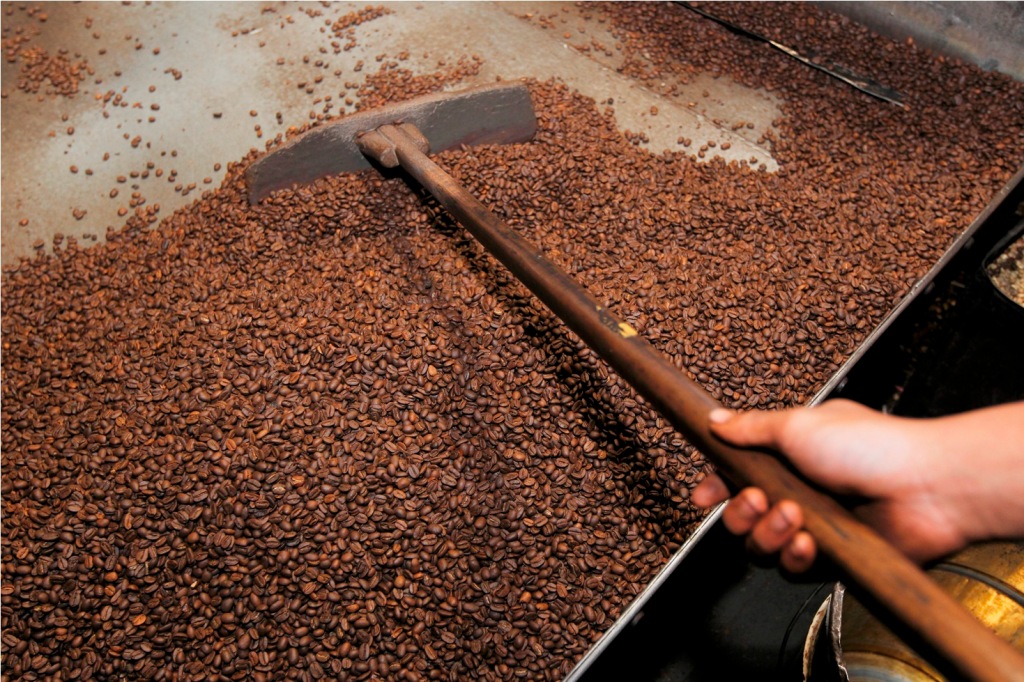 It’s a delightful experience to see a roaster’s playground. There are old machineries that you will rarely see anymore nowadays. Sacks and sacks of coffee beans came from farmers of all over Indonesia were stored after dried for weeks on the farms and hours here.

“We aged the Arabica beans for a full eight years time and Robusta for five years before we roast it. It’s all based on the experience that my late father taught me”, he said.

For Kopi Aroma, this method becomes the way to standardize its coffee beans and to deliver the best result for the customers. The best gimmick of all of Kopi Aroma’s workflow is the use of German’s Probat drum roasters which are still fueled by firewood. It’s their pride and joy since the day it began its business in 1930.

“We use only the sustainable wood from rubber plants and the roasting process takes around two hours. The heat has to be maintained by using five to six small blocks of woods and all you have to do is to wait until the beans start to give away the popping sound”, said Pak Widya scientifically.

Seeing our curiosity, Pak Widya couldn’t help but to tease us, “You might not want to become a writer forever, learn from me on how to become a coffee businessman!”. As a lecturer in entrepreneurship, he swayed us with his tales of success and the discipline that he maintains while at it. Interesting, but it’s not an easy path to choose.

“My father saved up some money while apprenticing to a Dutch coffee businessman so he can finally open up Kopi Aroma. He had since taught me on how to run the business in details and that I should not derail out of the consistency if I want to continue this business forever”, he continued.

To continue his father’s legacy, he treads an ascetic way of life for decades now but still leading a harmonious, balanced life where he could also become a philanthropist. That surely came from experience with willingness to tread this path wholeheartedly.

“What is the use of working only for worldly achievements? We have to save up for our afterlife as well. God is our witness”, he said sternly of his beliefs.

We then passed through the front sales counter where Pak Widya’s family and staffs were busy packing the coffee in small batches and weighing them one by one to cater the customers’ specific orders. It is said that to ensure the quality, Kopi Aroma will advise its customers to buy in small quantity first and then to return again some other time after they finished their last batch.

As it turns out, we shared so much in common from how we once attended the same school in Bandung until the point where I revealed that my great grandfather used to own the convenient store right across Kopi Aroma. He was surprised but happy to hear that.

“Your great grandfather was a good man. He and my father used to sit on the porch and drink the coffee together every afternoon. Their friendship was genuine, unlike people nowadays”, he reminisced.

I was touched. Hearing the story about my great grandfather, whom I never had the chance to meet in all my life from somebody who is not your family was a proud moment for me.

That’s why with people like Pak Widya, the history can be preserved well. His late father Mr Tan Houw Sian and Pak Widya himself are those who put the extra effort to make our coffee world at this level now.

Even with all what’s happening outside, Kopi Aroma is timeless, but will always be considered highly as one of the pioneers. It has always been walking its pace slowly but for sure, no one will forget its legacy.