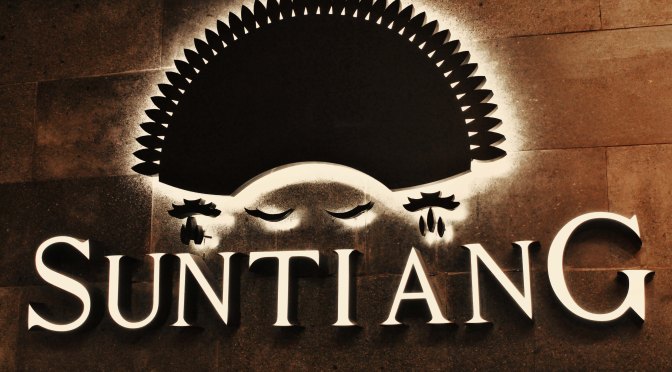 Has it been twenty years? Probably yes, and that’s how long I hadn’t set my foot again at Pondok Indah Mall. My last time was probably during one of those holidays back in my elementary years. Phew!

Finally, just around a month ago, I decided to come here and the credit goes for Suntiang. Well, literally suntiang is a really heavy crown usually worn during Minangnese wedding by the bride. It is believed that after she endured such weight the whole party, she’s entitled for a happily ever after marriage.

But the Suntiang I meant here is the latest addition on Jakarta’s culinary scene and by this name, they are offering something interesting aside from your usual nasi kapau. The owners are, from what I heard, are creative young people who wish to preserve the grandmother’s traditional recipes on one side, and to make it interesting, they bring Suntiang to a whole new dimension as a place to enjoy fusion sushi!

Fusion sushi is not a big deal anymore as everybody enjoys their California rolls, the phoenix, or the dragon, but in Suntiang, they intertwine Japanese and Minang in its sushis and other stuffs. So how about that?

The process itself was actually an elaborated one as they hire a sushi chef with 20 years of experience, crash-coursed him with the grandma back in Solok – West Sumatra for a month or so to learn anything Minangnese, back to Jakarta for the whole experiments, try-and-tested it, until finally Suntiang opens its doors. All of that fuss took nearly a year and it’s something you must not take lightly as the result.

So, during my virgin flight, the six gyozas was the starter that ignited it all.  It was all filled with rendang and chicken and came in with the gulai and balado dipping sauces. Lucky it came in evenly so my wife and I didn’t need to fight over it!

Secondly, the fusion rolls. Much to my amazement, the sushi came in so colorful and I can’t believe how Minangnese touch could also give the unique beauty the way we always perceive traditional Japanese food. The philosophy on how to make people pleased with the looks first and then the taste in Japanese cuisine can also be achieved by Suntiang through their rolls!

Over the three, I favored most the sambal chicken teriyaki rolls which incorporate kyuri and chicken teriyaki inside the roll and topped each with sambal merah and sambal hijau a la Minang! To make it even more beautiful, they also sprinkled rendang telur all around the sushi. How majestic!

The rendang roll was also fun to play with and personally I’d have it a tad spicier to my liking but not to worry from Suntiang as they tone down the level of spiciness a bit to make it favorable for any tongue.

The last roll was the salmon skin roll balado. This one has its potentials especially with the balado sauce but since the salmon skins were buried inside the rolls, this made them not crispy anymore and a bit hard to chew. Hopefully, Suntiang can do something about this in the future.

Additionally, I also enjoyed my gulai ramen a lot. It was a rich one and came in generously with an egg, slices of chicken karaage, fish cakes, and the usual vegetables in Japanese-style ramen. For a price of IDR 58,000, it came in so big and you’d best ask one or two of your friends to conquer this one than by yourself, unless well, you’re really that hungry. 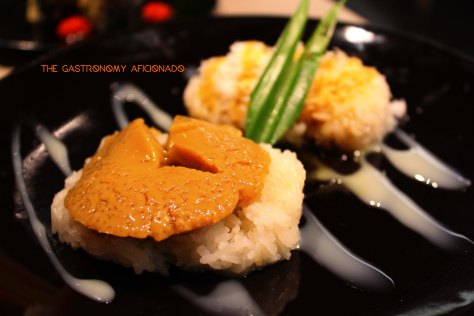 For the closure, we were honored with the grandma’s specialty dessert of laman katan sarikayo. It’s basically a sticky rice dessert topped with the highly prized sugar-apple jam that any Indonesians would die for and the other one came in topped with grated coconut and brown sugar sauce. This one will definitely seal the deal!

However, if you prefer something fresh though, Suntiang can also prepare you their signature mocktails of strawberry, passion fruit, orange and apple juice for the one they called Red Suntiang and a mix of kiwi, green tea, orange, and apple juice for Green Suntiang. I have to say that both of these are made of clever arrangements and will definitely sooth you during the hot days ahead of Jakarta’s summer.

Well, next time, it’s going to be the all-out battle for me against the delightful recipes of Suntiang on its nasi kapau. It’s back to basic first for me before heading again for the sushi. I shall return!