A multitalented girl with an extreme infatuation towards food? Let us meet Ade Putri Paramadita, or known in the digital world as @missHOTRODqueen! 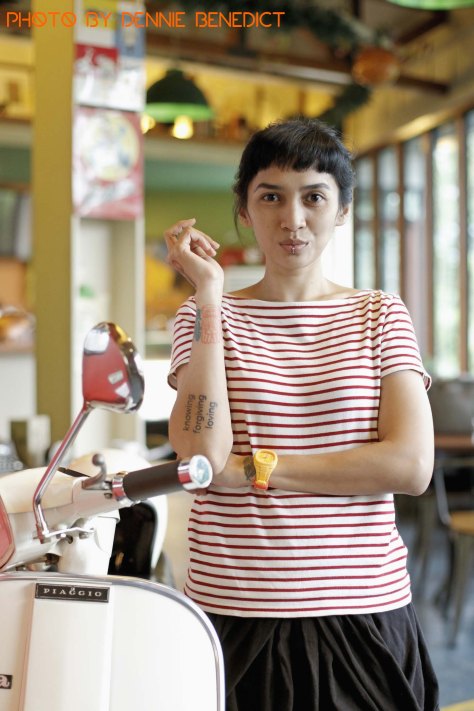 Initially, I got to know Ade Putri Paramadita from her reputation as a radio presenter, having her own show about food. It’s a whole different perspective aside from TV, online, or print media because you basically can’t see the food. Her job to visualize it to her listeners made her a great storyteller. It’s hard to avoid hearing my stomach growl after listening Ade talk about food.

When I met her in person, Ade apparently is this cool, slim girl with tattoos and piercings that made me swear that she looks more like a rockstar than a foodie! Well, in her spare time, she’s actually a road manager for a well-known indie rock band in Indonesia. But behind all these, she gets excited when it comes to food.

Although working daily for a digital agency as a producer, she always spends her time wandering around many places with the food-lover community of Aku Cinta Makanan Indonesia (ACMI) under the guidance of William Wongso. Alongside ACMI, Ade often goes out to scour traditional markets, participates in cooking classes, and as the organizer potluck events with other members.

“My fascinations with Indonesian food are endless. You’ll always have a story behind every dish because of the complexity. When I was a kid, I learned about so many ingredients from A-Z but in the end, they’re all used for a single dish only!’, Ade said with eyes brimming with excitements. One of these days, she helps the catering business owned by her mother and as a buzzer to help promote her mother’s warung in Cipete that oftentimes closed after only three hours of lunch rampage. Cooking becomes something that’s so inherent in her family.

‘My favorites came from Balinese and Minahasan cuisines. From Bali, it’s any kind of lawar because I love how it tastes, and from Manado – the outrageous heat from any kind of woku dishes’, she admitted. ‘Balinese cuisine is just fantastic and even my friends called me Ade Bulung because I’m so in love with rujak bulung. As for my personal indulgence, take me out for good Bataknese babi arsik and the smoky se’i babi from Kupang!’

When I found out more, turns out that Ade has her own romantic way of enjoying good time with her lover no matter what the food is. ‘For me, a romantic date is to try someplace new whatever the food is. If it’s good then we’re gonna share the good news with everyone, but if it’s bad we’ll just laugh and enjoy our time together’, she said.

I then asked her about one example of her bad experiences. ‘Well, one time I ordered this pasta with feta cheese and spinach back in an Italian warung when in Bali. When it comes, I can only find greasy pasta with only basils, no sign of feta and spinach at all! Me and him, we just laughed’, she said widely smiling.

Woku
Seafood dish with extensive use of spices, often making up half the dish. The ingredients consist of turmeric, ginger, lime leaves, chili peppers, lemongrass, and others.