Arrived at 2.30 am in the morning, exhausted, and had to proceed with the wedding ceremony the next day, finished around noon, took a nap, attacked by a bed bug, and then came my last evening in Yogyakarta. Even though I got caught in-between fatigue, deadlines, and my latent willpower to scour Yogya, finally I decided to take a ride on a becak with my wife and led us for a really fine dinner. Gudeg Yu Djum was our obvious choice!

It’s not easy to ride on with so many responsibilities in hand, so little time, and exhaustion. Not to mention that we’re going to have a long ride back home to Jakarta by bus on the next day. Traffic gets crazy nowadays with so many people now own cars and motorcycles, so many buses and trucks on the highways, and the never-ending irresponsibility of local governments to really maintain the road quality. It became stressful to do land travel nowadays in Java and that’s the reason we arrived in Yogyakarta the previous night after an almost 24 hours ride!

So under those circumstances, the dinner’s better be good or else..! 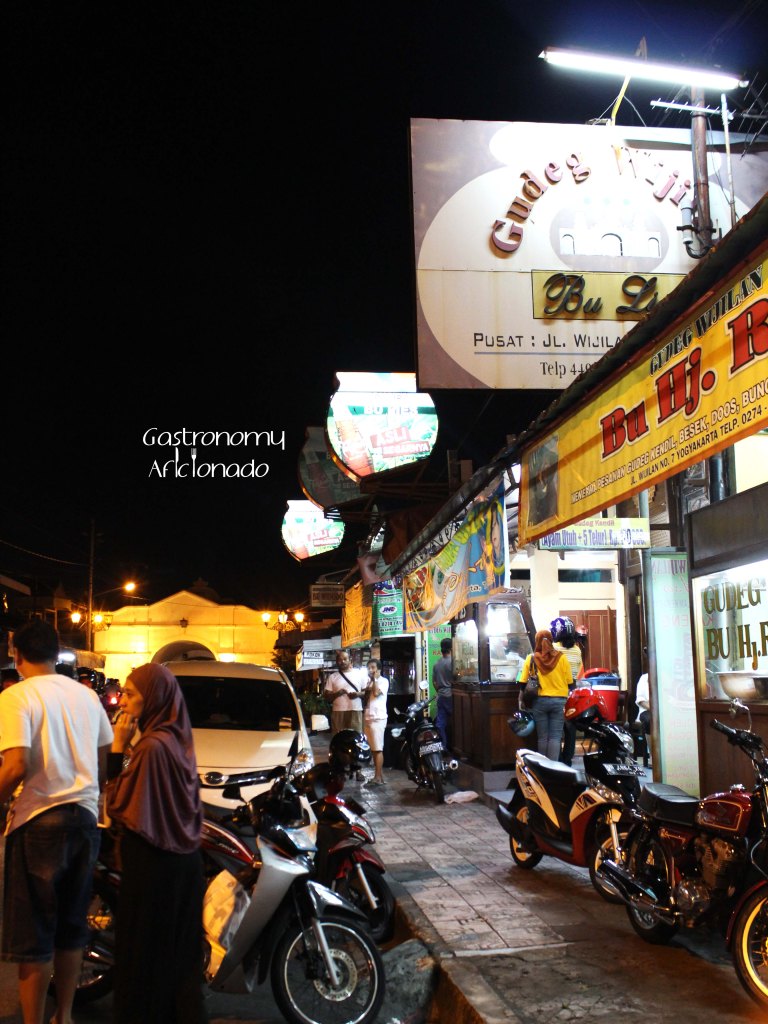 Clearly the obvious choice goes for gudeg on Jalan Wijilan. Well, we’re using becak, Wijilan is nearby many places of interest, and gudeg should be fulfilling no matter what. The competition is pretty fierce on the street and each place offers adequate space and cleanliness, but that’s not the case for Yu Djum.

Gudeg Yu Djum occupies a small, cramped place and we had to wait until seated for like around 10 minutes. Well, the cleanliness has never been an issue for Indonesian hawkers even the famous one, so you’d better set your expectation on the food and nothing else. Although service was quite slow here, one of the staffs was quite helpful and managed to get us through with what we wanted.

Originally I wanted the cheaper kind of gudeg such as the ones combined with egg, tofu / tempe, or ayam suwir (shredded chicken), but since it’s almost closing time, they’re almost finished with the usual choices. This left me with only gudeg telur and chicken breast for a heftier price. Well, what I really needed that time was a decent dinner and in that case, I don’t mind at all. Lucky that my family’s also okay with whatever they could get that night.

The portion was small but it was deceiving. I underestimated it at first but it all turned out really well. Yu Djum’s interpretation of gudeg is a mixture of balanced sweetness and emphasizes more on the spicy side thanks to the solid performance of sambal krecek (made from diced cow’s skin). Of course the rest of the team did well and it was a harmonious teamwork between the warm rice, gori (young jackfruit), hard-boiled egg, and the chicken.

Well, I can’t say much for now as I have to compare Yu Djum with the rest of the competition at Jalan Wijilan or even somewhere else. But rest assured that Yu Djum’s version of dry gudeg is clearly one of the best so far, but you have to be a bit lenient and not too picky with the cons. Until next time, Yogya!

Must eat: All delicious gudeg combinations!