Hey, you know what they say that ‘third time’s the charm’ or ‘third time lucky’? Yes, that’s how I encountered this slippery hawker back in a small town of Sokaraja, just a few miles away from Purwokerto in Central Java. By the way, I have to thank a friend of mine, a native Purwokertoan, the famous Wasis Gunarto for telling me about how good the satay is and made me turn upside down just to get my hands on this elusive hawker for several times. Finally the third time was really a rewarding experience!

Last Lebaran during my mudik here, Wasis took me to travel around Purwokerto and introduced its culinary charms. Additionally and specifically he mentioned two noteworthy local dishes around Sokaraja. The first one was Soto Sutri, which took me several times also to find since it’s hidden inside a rural residential area and fortunately opens after Lebaran, and then Sate Ayam Sinar Jaya, the most elusive one. Closed since my arrival in Sokaraja and even until after Lebaran, thus I had to let it go.

The second time was when I passed by Sokaraja on my way back to Jakarta from Surabaya. We arrived around dinner time and it was the perfect time since Wasis told me that it opens only around evening. We parked the car, saw it open from across the street, crossed the busy street with a big grin, but when I just arrived the owner told me that they’re already finished. That broke my heart so bad and my dad-in-law had to drive our car back to Jakarta by himself because of that. Hahaha.. That’s just a joke, but I was quite brokenhearted that evening. 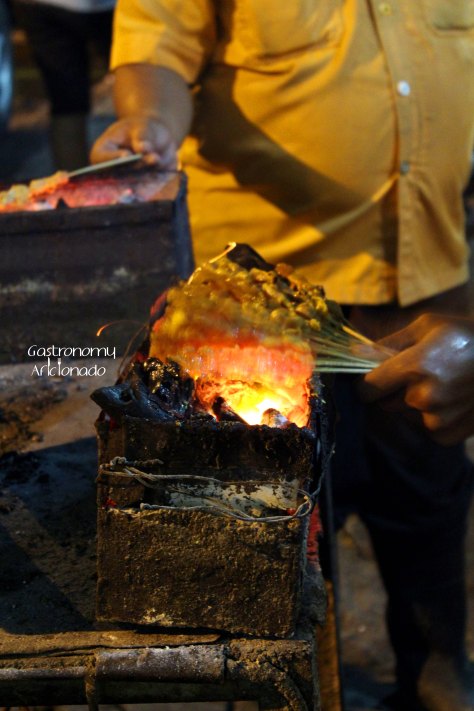 Finally, the third time lucky moment arrived. Just a few weeks ago we passed by again the town and it was quite early. I took my leave quite early just to get myself the satay. Finally my prayers came true and they still have lot to spare for the customers. Quickly I ordered around 30 skewers of satay. By the way, they only serve chicken satay at Sinar Jaya, no lambs or no beef.

Unlike other satay hawkers, Sinar Jaya serves pretty fast and still remembered what Wasis used to say that they have a rather unique peanut sauce. Indeed it was, the peanut sauce was mildly blended and has a distinct smell of a curry. Apparently, the peanut sauce was mixed with a certain curry sauce that involves coconut milk so that it reached not just a unique taste, but also rich and milky. Before serving, a handful of satay was dipped first to the sauce and then literally bathed with it alongside the rice cakes. 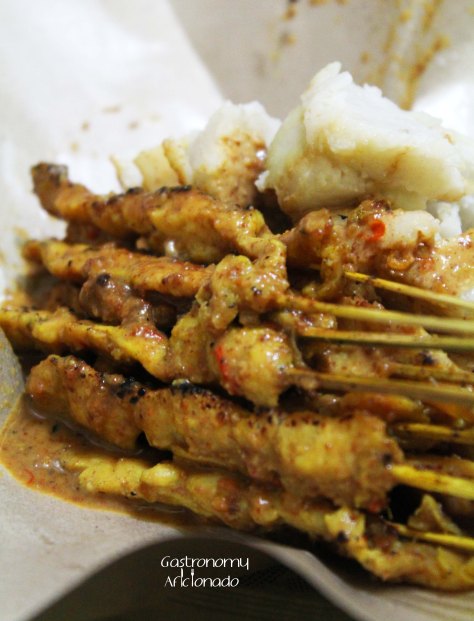 Returning back home, I was definitely in awe with the satay. Not only that it differs itself easily with the usual satay we often encounter anywhere, but it was really fulfilling because the generous amount of chicken flesh on every skewer of the satay. Perhaps they did pound the chicken first but it made your every chew worthwhile. However I have to advise you to just combine it with a plate of warm rice instead of their mushy rice cakes.

It’s a dream come true and a third time lucky moment indeed. So whenever you’re around Sokaraja around dinner time, you really have to drop by and forget the traditional Soto Sokaraja and Getuk even though it can be easily found around Sate Ayam Sinar Jaya.

Address: Jalan Jendral Sudirman (on the left side from Purwokerto, around 150 meters before the riverside traffic light), Sokaraja, Central Java – Indonesia