For decades we have acknowledged Ayam Pop as an essential part of the mythical Minang cuisine. However, the interesting fact about this particular dish is that it was actually discovered ‘quite recently’ or perhaps around several decades ago by a hawker’s owner in Padang who relocated to Bukittinggi, West Sumatra. My most recent visit to the city brought me to know more about the inventor.

After accompanying my friend for an interview with Mr Amaury, the chairman of ASO – a company that organizes Tour de France and Dakar Rally, I decided to follow my good friend Daniel recommendation for Rumah Makan Family just nearby Grand Rocky Hotel, which is actually not that far from the most expensive hotel in Bukittinggi, The Hills.

It was around 8 pm and our hotel was pretty much far from the restaurant. My friend boldly asked a waiter whether there’s any possibility for a cab to take us back to the hotel but some locals instead offered to call the taxi for us. While this may be an awkward move in an increasingly superficial society of the so-called modern Indonesia and their love for democracy back in Jakarta, but I tried to give it a chance to these gentlemen came far from the influence of the scandalous capital and perhaps, they’re after all honest (and in the end, yes!). 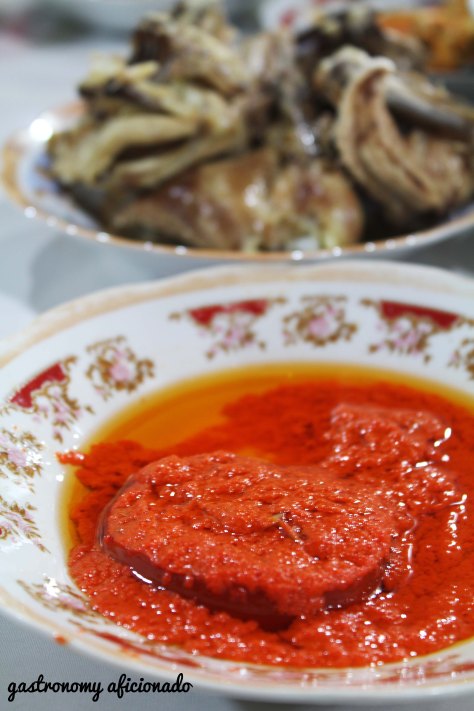 Meanwhile, we were served with the usual formation of Minang cuisine with the additional of the restaurant’s specialty dishes of Ayam Pop and grilled gourami fish. If you’re looking at Ayam Pop, it’ll look like pale chicken pieces, maybe raw and somehow oily. It’s definitely not inviting for many since the chicken was plucked out of its skin, making itself look ‘naked’.

But here’s something philosophical about it because it’s the ‘Don’t judge a book by its cover’ thing kicks in. This chicken, however uninviting as it may seem, has undergone series of good seasoning and of course, cleaning. The chicken then dunked into a hot coconut oil. The fragrance and all its goodness then linger thus it became something beautiful came out from heaven!

Its deep flavor combined with the tomato sambal has always been a lethal combo. Even another journalist friend who came here after my recommendation finished five pieces of chicken! That’s just awesome, especially when you found out that the expectation fulfilled.

The restaurant itself appears like other rumah makan you’ll find around West Sumatra but since it’s located in a cool city like Bukittinggi and overlooking the valleys, the atmosphere here gives a major plus points. RM Family is simply where can found both the authenticity, great flavors, nice people (who actually helped us find a cab back to the hotel), and wonderful surroundings. Thank God for Tour de Singkarak, now I can scour the blessed land of West Sumatra with much ease.