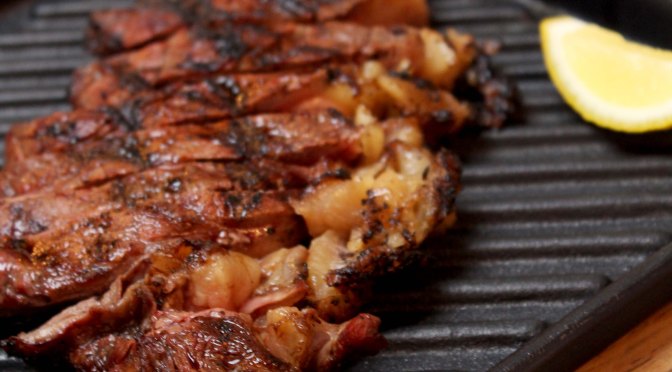 Potato Head, as we know it, has been a powerhouse name for its dine and lounge establishments back at Pacific Place shopping mall in Jakarta and the beach club in Bali. Now, a new installment arrives and goes with the name Garage which actually located not far from the first ever Potato Head. Here’s a bit about my very first visit there.

Potato Head Garage resides over the very same spot of what we used to know as Bengkel club back in the past. Its gargantuan size is indeed mesmerizing and Potato Head put a magic spell on it to make it special.

Although the place still retains its ‘garage’ characteristics especially the roof, Potato Head has put real effort to make it elegant and also homey. The owner’s particular fondness on chandeliers has been put into great use to decorate Potato Head Garage with probably hundreds of it coming from every conceivable angle of the ceilings. Not to mention also the classy appearance of a grand piano, a huge artwork from 19th century Russia that appears like the a huge cabinet to reserve candles and iconoclastic figures of Orthodox Christianity, plus a manifestation of industrial and nonsensical simplicity in its interior design.

A session of cocktail making by Dre Masso, imported straight from UK, was missed but I saw that he made a gimmick out of the drinks for everyone. So and the end of the drink when they put back their glasses back on the table, a small firecracker will ‘explode’ from underneath the glass. Really amusing!

By the way, this leads me now to talk about the lunch I had that day. Well, it  was said that this very Potato Head emphasizes more on steak and that the pricing structure would be wide since they will be serving affordable good quality steak and up to the super steaks using special beef from Spain and Japan which cost from 1,7 million up to 2,5 million rupiahs for one serving!!

Not to be afraid of that though, since Chef Hikaru Take of Potato Head Beach Club in Bali has also prepared a wide range of intriguing dishes from appetizers to desserts. By utilizing its wood fire grills, Potato Head Garage creates unique meat products both fragrant and classic and can be found easily with a really good introduction of grilled beef salad of chili, lemongrass, lime, kyuri, tomato and the usual mixed green. This resulted in an enormously refreshing taste to really boost my appetite to keep on digging and digging. The presentation itself was beautiful especially with all those perfectly julienned vegetables of pretty colors. Additionally I have nailed bocconcini or a traditional cheese made from water buffalo’s milk into my cheese dictionary after having an also delectable salad of sliced tomatoes, vinegar, extra VO with basil oil.

From the Italian section, we had fresh-made pasta of rigatoni with the beautiful recipe of puttanesca and wagyu ragu with pappardelle. Light, again refreshing, but still rich in taste. Even so, I’d prefer to skip this next time and head for the real deal found in their steaks.

The one we had was the 400 grams of Black Angus strip loins, grilled medium although you may still find the charred black on the tip of the meat. The meat was of course of good quality and we had it either plain so that we savored each and every bit of its deliciousness in it or just dunk it a bit with the yuzu sauce. Again, it’s refreshing and it’s Chef Take’s personal touch in it. The accompaniments were the enchanting glazed organic baby carrots from Australia, the silky mashed potatoes, the sweet baby corns, and great-for-anytime shoestring fries freshly cut.

Other than that, the chocolate cake with passion fruit sauce were quite okay but I’d rather have that steak anytime or perhaps, the most expensive one next time. Well, 1000 grams is actually good for everyone to share right?

It’s an interesting turn taken by the Potato Head brand as now they decided to involve themselves more with meat business. Even so, the ‘Bengkel’ mystic trademark of this place still cannot be removed and instead of a ‘Steakhouse’, they decided it with a ‘Garage’ instead. In my personal opinion though, I think it’s better to use a prettier word that depicts the elegance of this place rather than a garage. Well, it’s quite catchy anyway. Not to forget, reservation is indeed a-must since this is the most current and very soon-to-be one of the hippest as well. Enjoy!