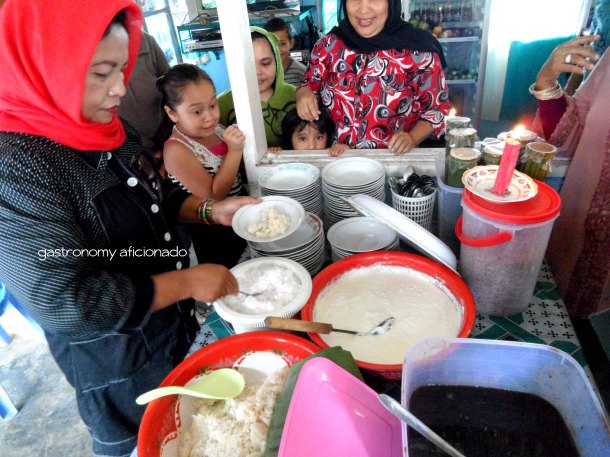 Earlier this year I was asked to correspond about the history of yogurt by Trans7 and stumbled myself during my research with dadiah, a particular delicacy came originally from Western Sumatra. I was indeed mystified as the whole thing was pretty much different with the usual kind of yogurt and been hoping to taste one since.

Then came the fateful day when it’s time for me to really taste the real one during my travel for the first time with Rendang Journey 2012 to Minang!

It has become the answer to my prayer that I really wanted to taste the real Minangnese cuisine cooked by the locals back in their territory and not just that, Rendang Journey even indulged me to taste this particular delicacy around the regency of Lintau, far east from the city of Padang. By the way, Rendang Journey itself is a thesis project done by the graduate students of STP Trisakti and one of the events was to visit Sawahlunto and Lintau in Western Sumatra.

Lintau itself offers a vast array of richness, starting from the wonderful landscape, tourism potentials, a very fertile land, and of course, great food! One afternoon, we stopped by at Katan Badadiah Buk Nur, a small restaurant that specializes in serving dadiah. While some serve dadiah with ampiang (rice krispies), Buk Nur serves it with katan (glutinous rice) which is easier to chew rather than the former. Dadiah itself is made from water buffalo milk and fermented inside a bamboo, which contains the right bacteria for the yogurt transformation. Personally I found dadiah tastes pretty much the same but does not possess the smoothness of the usual yogurt, making it unique and rustic.

The way they serve it is another interesting thing. First of all, Buk Nur put the glutinous rice on a plate then she showered it with grated coconut, dadiah, and finally the right amount of liquid palm sugar. Even though we just finished a huge lunch treat of randang baliut (eel rendang) back at a rumah gadang (Minang traditional house) owned by a very friendly local, we just couldn’t help to also finish this ‘dessert’!

It was a magnificent treat with inexplicably complex texture came from the glutinous rice, coconut, and dadiah plus it also has several layers of taste from sour to sweet. I was just hoping that they could try to serve the dadiah cool or to add an ice cream, it would be even lovelier and beats the hell out of any dessert I’ve tasted before!

During my travel, I also found that some people also mix small cuts of shallots into the dadiah which even makes it richer in taste. The distinct sourness of the yogurt and the particular taste of shallots collide, making it something you’ve never tasted before in your entire life!

Oh how I miss Lintau already. The people, the food, the hospitality, the beauty and many whimsical things I found there. Hopefully one day I could return back there again and I will, as the ex-regent of Lintau said to me there, ‘Once you drink the water of Lintau, you’ll be back again someday’.