8 Classic dishes not to be missed in Bandung

Bandung has been well known as one of the culinary capitals of Indonesia. With the huge development of the city’s tourism over the past few years, new restaurants and cafés have sprouted up like a wildfire. However, the classics remain brave, resilient and still flourishing.

The Indonesian culinary scene has never been this crazy before. Influences from abroad arrived without a moment of hesitation and Indonesia suddenly became the melting pot of many foreign cuisines. Many local ventures have taken on a modern look but many more cling to their authenticity.

Many of the dishes popular in Bandung have been around for years, decades and some even originated from the Dutch colonial era in the early 1900s.

So here is a hand picked selection of the classics that have stood out the test of time.

1. Classic Chinese cuisine at Toko You – Jl. Sultan Hasanuddin No. 12

From its modest beginnings of only serving noodle dishes and the delicious bakso goreng (huge shrimp meatball), now Toko You serves a vast range of Chinese food, local fare and even Indian cuisine under the roof of Javanese style interior. With the addition of colonial heritage furniture and paintings, Toko You now presents itself as a stylish establishment and yet maintains the originality of those delectable, hearty dishes at affordable prices.

Braga Permai, previously Maison Bogerijen, has served colonial style dishes and homemade ice cream for many years. During its heyday, it was frequented by wealthy people during the colonial era. Great ice cream dishes like the classic Wiener Melange filled with coffee and topped with vanilla ice cream or the eclectic Sengasengana, which is full of fresh strawberries, are among the best choices here.

3. Kupat Tahu Gempol – Jl. Gempol (right nearby the T-intersection, in front of the Gempol traditional market)

Grandma Yayah has been selling one of Bandung’s tastiest kupat tahu (rice cake, bean curd and bean sprouts mixed with a peanut and coconut milk sauce) since the 1960s. She is very friendly and modest. Make no mistake – her hawker is one of the most sought after for breakfast. It’s purely because her take on kupat tahu is silky and rich!

Pak Asep has been selling cendol (worm-like jellies made from rice or sago served cold with palm sugar and coconut milk) for many years. He was the first to use only pure sago without the green coloring from the dracaena plant; this makes the cendol naturally white and translucent. To make it more luscious, he adds extra coconut milk and uses only the best palm sugar and jackfruit. He keeps his cendol in a big clay pot believed to retain the coolness of the beverage – which is definitely best drunk during hot days. Very refreshing!

With lomie (noodles with Chinese spinach, bean sprouts, shrimps, meatballs and sticky soup) as its signature dish, this once small side street hawker has now transformed into a formidable business and turned this once silent, leafy street into a buzzing one. Aside from lomie, this stall also serves other classic noodle dishes.

With a history spanning over many decades, this Chinese immigrant-influenced martabak (flipped thick pancake) from the island of Bangka has now become ubiquitous all over Indonesia. One of the pioneers for that achievement is Martabak San Francisco.

What once started with only nuts or sesame seed as its filling, now martabak as we know it uses milk, chocolate, cheese, banana, strawberry, blueberry, jackfruit, raisins, and many more as the selections for the filling. It is sinfully delicious and the best part is that you can have it your way!
7. Laksa at PT Rasa Bakery & Ice Cream– Jl. Tamblong No. 15

There’s always a place in a town frequented by the grandparents. Yes, PT Rasa delivers all that nostalgic feeling through an array of alluring Indonesian classics such as laksa (rice cake and vermicelli in light curry broth), fried rice, nasi rames (rice and assorted sides), and many more. Additionally, Rasa also serves timeless snacks such as bitterballen with mustard, saucijs brood (puff pastry filled with meat) and mini lasagna. The best is definitely its homemade ice cream creations and Dixie-style ice cream cones! 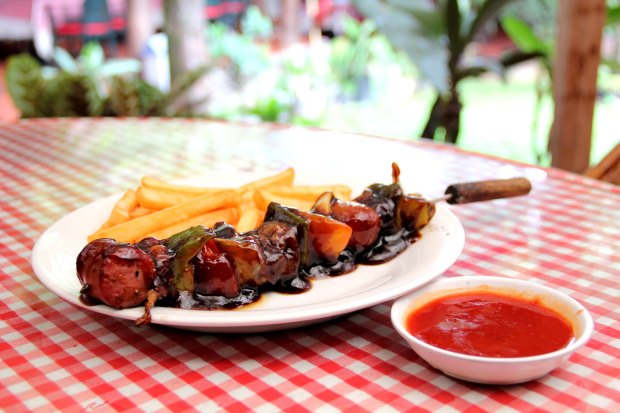 With its uniquely beautiful look and small garden in the middle of the restaurant, Tizi has always been a classic choice for a romantic dinner in Bandung. Tizi’s specialty is its famed schaschlik (German-style skewered meat and vegetables) and German sausages. Its wood-burned pizza and sandwiches are also worth a try. Don’t forget to take some of its distinctive European-style pastries back home.