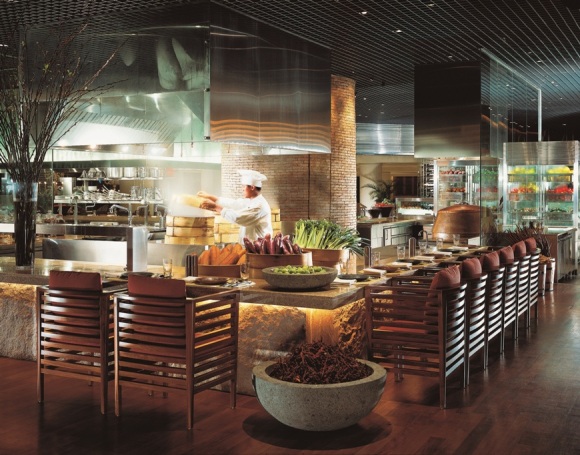 A distinct landmark around the prestigious Hotel Indonesia roundabout in central Jakarta is the Grand Hyatt Jakarta. Equally well known is their signature restaurant, C’s.

With a reputable history spanning for the past 10 years, C’s maintains the traditional way of letting the qualities of the seafood speak for themselves – served fresh on ice, grilled, or steamed to perfection.

My first encounter in 2010 was a pleasant one. C’s presented itself as a multi-sensory dining experience. The interiors are warm and friendly, with neatly arranged tables. The unique entrance showcases legions of wine bottles. The open kitchen invites diners to smell dishes cooking nearby. Additional decor of spices and ingredients in baskets and bushels lend the feel of wholesomeness and freshness. Clearly, C’s is the no non-sense view of cooking. I was in for a collage of gastronomic delights.

One attractive dish in particular that survives in my memory for the past two years was the raw oysters, strikingly fresh in appearance over a bed of crushed ice and accompanied with lemons. You know the drill there, just squeeze the juice out of the lemon over the oyster a bit then enjoy the pleasure that goes slurping the succulent oyster into your mouth.

With those reminiscing thoughts residing after so long, turns out that C’s is still under the capable hands of Mr Christer Foldnes, a purist seafood expert came all the way from Scandinavia. Born and bred in Bergen, a coastal town west of Norway, it’s only natural that Mr Foldnes developed his love for seafood since early.

At a young age after a few years of becoming chefs in several prominent restaurants and hotel back in Bergen and Copenhagen, Mr Foldnes achieved a prestigious recognition as the Norwegian Seafood Chef of the Year in 2009. With that he became the envoy for Norwegian seafood promotion until finally he set himself a new home here as Grand Hyatt Jakarta’s Executive Sous Chef.

When asked why he chose to be here, he simply replied, ‘It’s my first time working in Asia. It’s very different and challenging in a good way’. Though he strikes me more as a humble chef with gentle personality, Mr Foldnes deliberately admitted that it will be a never ending quest on sharpening his skills as a chef, therefore indicated his true ambition of becoming greater as time unravels.

During my second encounter with C’s, it’s a walk down the memory lane as the chef prepared a half dozen of American oysters which were tantalizingly fresh and breezy. What came next was the Chinese style of perfectly steamed coral trout over a savory soy sauce. A mix-and-match appetizers that were clearly successful in tempting us for the next round.

From there, we witnessed the simple way of serving seafood a la Nordic cuisine. Presented upon a humongous platter, Christer created a combo of grilled frutti di mare in a very enticing way. It’s a seafood assortment of Canadian lobster, Norwegian salmon, scallops as his most favorite ingredient of all and prawns with a bit of salad to make the whole dish appear more fabulous. In addition, he cleverly equipped our carb intake with a plate of delicious lobster risotto. Again, it’s an irresistible treat that didn’t take long to be savored completely, much to our hearts’ content.

Thus it became another remarkable experience that satiates my expectation. It’s been two years but it just feels amazing to realize that Chef Christer has done a lot of tremendous effort to deliver a consistent result. Even though he presents his dishes straightforwardly, but I can feel my curiosity growing as I unravel more about the beauty of seafood.

Now that last year’s event of pairing him and the Norwegian Seafood Chef of the Year of 2011 said to be successfully concluded, will the future also witness him combining his culinary might with the 2012’s champion? Clearly it’s a quest that I must fulfill personally.