By chance I received an interesting offer to stay for one night at the relatively new budget hotel on Sabang Street, Max One Hotel. I’ve been around the neighborhood several times and it’s just nice to see a proper budget hotel built strategically at the heart of Jakarta’s backpackers area.

The vicinity that covers Jalan Sabang, Jalan Jaksa, Jalan Wahid Hasyim, and Jalan Kebon Sirih have been known as the Jakarta’s sole backpackers area. Not only that it’s nearby the places of interest in Jakarta such as Monumen Nasional (Monas), museums or everything historic, and modern stuffs such as shopping malls, but also as a food haven. It’s a strategic move by the relatively new hospitality group of MPHG to build their flagship budget hotel at this very vicinity – Jalan Sabang to be exact.

All the cab drivers know where this road is and you just need to find a hotel that has a mini market attached to it alongside Coffee World as its restaurant. Now this is quite silly actually, I had been to Bangkok a couple of years ago and found myself a very decent hotel for a bargain price. Well, it’s not really new but the most important thing was that with only around IDR 300K a night, I got myself a good, fat breakfast every day.

Well, not here though, man. You gotta order your own breakfast and put it on your tab. Well, it’s quite affordable but then again, the street is a food haven and if you’re backpacking, best to find more choices outside. But still, if you want to have your food delivered to your room, you have to walk out of your room a bit and use the common phone just nearby the elevator. How stingy. 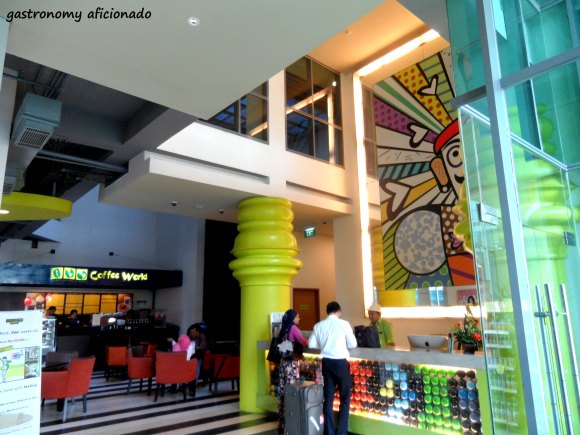 Let’s just rewind a bit from the start. The problem actually started from the receptionist. Not only that we had to wait for quite some time just to get our room key but I also had to ask her whether the room’s ready or not. After I asked, she handed to key instantly! Wait, was it supposed to be her to let the guest know that the room’s ready? Oh dear..

Other inconvenient thing was that she refused to create an additional room key card, which I found quite a nuisance. What if I had to head downstairs to buy stuffs for my wife who stays in the room from the mini market and then I can’t go up anymore because the elevator requires the key card? These days, hotels are giving the second key for free and I don’t think that it should become a permanent issue in the future. Certainly that there’s something that can be done!

Talking about the room however, once inside it’s actually pretty cozy although it’s pretty small (Happiness Room). I particularly disliked a certain pillar that hinders my movement inside the room. The bed was comfortable with a decent view heading to Gambir area, but we had to close the curtain at most time to keep the privacy intact. They could actually install a transparent shade so that we can still view the city view and the hustle-bustle on Jalan Sabang below.

The bathroom was also properly cleaned but the sliding door on the shower was broken. Lucky nobody got stuck inside the shower. By the way, the shower room is also equipped with a seat, so you can get yourself showered more comfortably (says no one ever). Well, it’s hard to argue that most people prefer themselves standing up while showering.

So, room-wise it was just good and the room service was also quick to respond our needs, even though we had to walk a bit just to reach the phone. Other downside would only because of the noise from below. They designed an open-air corridor and you’ll still find old bajaj plus the ubiquitous motorcycles anywhere in Jakarta all buzzing through Jalan Sabang. So the noise came from any direction then.

But lucky for you, as I said before that your stomach growling can get the right treatment right away. Explore Indonesian food down there from satay, soto, fried rice, Padangnese cuisine, or your usual treat of fast food. Don’t forget though to check the alley just beside the hotel and get yourself lost from just choosing your lunch. The alley used to be a shortcut to Jalan Sudirman but a few years back, a national bank there redesigned the alley and made it into a hawkers’ center.

Well, that’s it about Jalan Sabang and Max One Hotel. You might enjoy your stay but make sure to keep an eye on the service.