Thus the story must come to an end. The epilogue of a short trip filled with awesome tales and happy tummies! It has become a journey of an achievement as a food blogger and finally, the opportunity to stand out amongst fellow mainstream journalists. From here on, the food bloggers have their share in taking over the whole world. From here on, the future seems too bright for all of us!

I knew all along that it’s going to be hard to separate myself with this kind of attachment that had bonded us all together for the past three days. At the beginning, we’re all just commoners to each other although some of us know each other better than the rest. But all these walks, all these chit chats, all these unique experiences brought us together and we had all the joy even though most of us were in the line of duty.

There’s the knowledgeable Arie Parikesit, there’s the experienced Burhan Abe, the world travelers Reza and Jed, the fledgling Ellyna, the shy Galuh, the calm girl Muthia, the effervescent Bunga, and the quiet Graham. Not to mention our kindest ever PR slash group guide, Ms Rifka from Stratcom. The Singaporean PR team was also excellent. They switched place between groups Indonesian, Malaysian, and Australian in-betweens and were able to guide us punctually. 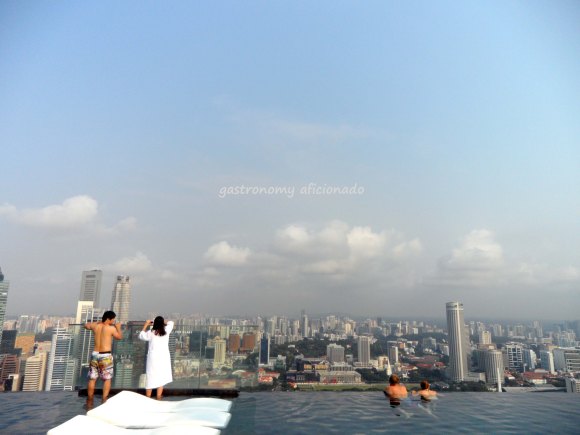 The third day schedule was designed to be more relaxing. I can finally lounge a bit very early at SkyPark and dip into the pool. But it was as early as 7 am and the weather was very cloudy. The wind blew so hard and cold, I could barely enjoy the pool even though finally I can witness the skyscrapers while floating there. It was an indescribable moment indeed!

To warm up my body from the point of stasis state, thanks for the windy morning, I dipped in as well at one of the Jacuzzis overlooking the Singapore Bay. It was warm, fuzzy, and very relaxing. Even so, it’s already packed with strangers and sometimes you have to bear with them occupying the same pool with you. Not long, I returned to my room and get myself ready for the remainder of my MBS gastronomic tour.

A session of informal interview over breakfast would be the first event of the last day. Sky on 57 had been appointed for the venue again and it’s just good to be back!

A set of enticing dishes were for the breakfast. Again I wanted to taste the Asian roots of Chef Justin Quek by choosing the delicious mee siam dish. While the rest had their share of Singaporean laksa, ramen, slow cooked organic eggs, and many else. We had the fruits first and that’s indeed something that we should do more every day – fruits first, the real deal later.

Mr Tamir Shanel arrived a bit later and joined us for breakfast. There we had a chance to talk more about him, the current, and the future state of Marina Bay Sands. The celebrity chef concept that MBS adopted currently under his leadership is perhaps the most high-profile project in South East Asia ever and promoting the cause had always been the reason of why we came at the first place. I do solemnly believe that today, the concept is probably the most advanced and the coolest thing any resort has within their sleeves.

From here some of us scoured again all over the mall and the plaza just outside just to kill some time before the next event. I suppose my coffee shop mission had gone awry even from the very first day. I got sick the first day, the second day I arrived late at Oriole, and the third day even Trung Nguyen – the nearest substitute coffee shop – was closed. Later this afternoon after lunch there will be around less than two hours before we had to arrive at the airport, but two hours won’t be enough to get myself at the coffee shops since notably they’re quite far in downtown. Not to mention that I’ll be doing plenty of coffee tasting, conversations with the barista, and some photo sessions. Two hours at one place might never be enough.

Well, I guess I had to do it next time. Hopefully soon though!

The Executive Pastry Chef of Marina Bay Sands, Mr Ryan Witcher, was demonstrating his ability to create some of MBS indigenous confectioneries at The Club. It’s more like a cooking class where all of us witness him telling the stories of his youth, well he’s actually still very young and has achieved probably the most important position of his career in years to come, and we were anticipating a lot on sampling some of his creations!

In fact, I would like to share you all with some of the recipes that he demonstrated that day! The ganache tasted just perfect, while the sorbet was very fruity and herb-ish. He did really well with infusing herbs and chocolate, making them a match made in heaven.

Anyway, that’s probably why we should appreciate confectioneries like these more. They require skill, patience, good ingredients, and long preparation time thus making it ‘costly’.

After here, the rest is just lunch and off we head home for Jakarta!

The end of a journey

Osteria and Pizzeria Mozza was the last among the six musketeers of Marina Bay Sands that we visited. For some reasons, I can sense why I see all smiles and laughs from everyone. Knowing that this will be the last event of our tour but it’s just nice to know that everyone’s content about it. Well, we should because it’s been quite a wonderful trip!

The lunch was a series of good stuffs from insalata to pizza. It was all nice but a tad too salty. Then again it’s probably the real Italian stuffs but I have no objection aside from my current flu state. Everyone had their own time of doing stuffs they need to do from here but we all promised to meet again at the shuttle station or at the airport. Some of them still had some interview sessions they need to do, another last tour of hawker’s dishes, a trip to Gardens by the Bay, but for me it’s packing time and the moment of truth.

I was still considering until the very last moment whether I should hit the town or not but eventually I decided to lay back and enjoy the remainder of my time here personally in my room.

It’s a start of a new era especially for us bloggers where we could now stand side by side with mainstream journalists. My trip to MBS was basically the second trip abroad as a blogger within a few months period. For the past few years, culinary is probably still the new kid on the block compared with fashion and travel but now everyone’s talking crazy about it. The food bloggers, no matter what their background, are usually a bunch of people driven by passion, curiosity, and great willpower. With the right amount of creativity, everyone can achieve the same or even much bigger than this! I believe in that wholeheartedly.

As I left Singapore with another part of my heart stranded alongside a vivid memory full of joy and happiness back at Marina Bay Sands, I still stood tall and ready to give myself more for something that I really love. It’s all about writing and now I’m off deeper, far away, into the sunset…