It was a rough night but I had all the rest that I need. In the morning, the sore throat and flu symptoms still hampered my total fitness but those didn’t stop me to fulfill my obligations and excitements for another fun day at Marina Bay Sands!

Yes, I woke up still unwell and hoping to get a full rest for the whole day. Perhaps later after I got better, sometime in the afternoon after lunch, I could sneak away for a cuppa somewhere in a nice, artisanal coffee shop in Singapore. What a wishful thinking! Besides, I didn’t want to miss this rare moment of scouring around MBS. Not to mention also having meals at the celebrity chef restaurants!

Me, Mr Arie Parikesit and Mr Jed Doble were all occupied three different rooms at the same floor. While Mr Parikesit disappeared so early – he later told us that he had had an early breakfast in a hawkers’ center somewhere. Well, he’s the typical Jalansutra adventurer. So Mr Doble and I decided to just meet up at the elevator and off we went for the scheduled breakfast at Rise on the ground floor of the hotel.

A short detour before the tour

The breakfast at Rise was quite pleasant but my appetite hadn’t returned yet since early morning. My taste buds felt only bitter or flat taste, but then again perhaps that’s the taste from all the food I collected for breakfast. But anyway, at Rise the variety of food was quite plentiful but crammed with hotel guests even as early as 7.30. I had worse experience back at First World Café in Genting or seen businessmen queuing at the entrance of the two international restaurants at Swissotel at The Stamford just a few blocks away from here. It’s somehow better here.

Mr Doble specifically commended the swiftness and hospitality from the cooks behind the egg station. As we all know, people from this section usually gets grumpy easily especially with so many patrons flocking and shouting, ‘Scrambled with cheese!’, ‘Sunny side up!’, ‘Omelette!’ and so on. As for me, I was quite satisfied only with the continental breakfast that I chose. The usual smoked salmon, salmon gravlax, air-dried beef, and smoked haddock were just nice as the opener, but not from the Asian section which I found just at par for my main dish. Well, the best part of all was that I took a large amount of lychee and longan to refresh my appetite and just to make my wife, who happens to really love lychee so much, envious of my catch!

The rest of the team arrived a bit late for breakfast and there’s still time before the tour. Mr Doble asked me to assist him in taking pictures while he’s having a dip at the pool up high in the sky. As much as I wanted a lot to enjoy the pool but there’s still tomorrow. So I’d just wait until I get better and enjoy myself with the pool since early morning! Not to forget the Jacuzzi as well!

Heart-of-House, the lifeline of MBS

We assembled at the lobby at around 10 am and headed downstairs nearby the MRT station for the staffs entrance. Yes, we’re heading to the Heart-of-House or the massive labyrinth where thousands of MBS employees went through daily for work. The whole place felt like a huge underground Tube station and to get in, we also encountered similar gates we found at train stations.

On our way to see Executive Chef Christopher Christie, we also bumped into the outfit room that has around 20 small doors filled with different costume lanes for staffs. All they got to do is to punch the card and wait until the designated costume appears. Later we also conversed a bit with a lady who runs the place. She might be short in stature and appears like a nice lady but she runs 50,000 costumes only for the staffs including the laundry or any sewing needs. Just fantastic!

Chef Christopher Christie was already there waiting for us. He happens to be very similar with Sir Ben Kingsley, by the way. I jovially asked him later after the tour whether somebody before me ever told him that he looks like Ben Kingsley. He replied with a smile that he remembered some who had told him about it. Anyway, Mr Christie is a Canadian, again short in stature but has a commanding tone and appears very confident with what he’s doing down here. He’s responsible to take care of the food for around 7,000 employees everyday! That doesn’t include for the guests both at the restaurants and for room services!

While he’s touring us around the kitchen to see sections responsible with meat, poultry, seafood, vegetables, and pastry, we also met Executive Pastry Chef Ryan Witcher who will be doing a chocolate-making presentation tomorrow – a really young fella who runs the show for all the pastries needs for the whole MBS! Not only him, we also met Mr Tamir Shanel, the VP for F&B of MBS, and reminded each other about a breakfast session with him tomorrow.

That time, We all thought that this massive work down here would require people to walk around so much and Mr Christie admitted that within these labyrinth that spanned over 500 meters from Tower 1 to Tower 3, a walk around 15 kilometers a day is something that he commonly does every day! But he looks healthy and high in spirit. That’s what you get from working for to fuel your passion!

Lastly, we also visited the canteen for the employees and it was just nice, clean, and very fulfilling. We even wanted to have our lunch here instead! The canteen has a massive dining room with plenty of food stations from appetizers, Western, Chinese, halal section, and also plenty of beverage stations. The employees are allowed for seconds or even more but they’re constantly reminded to always take food prudently. ‘Start small but seconds always welcome’, well that’s the motto there I suppose.

Finally before lunch, we headed for the ArtScience Museum at the corner of MBS complex. It’s a massive building shaped like a lotus and designed with brilliant architectural feats. A walk from the Heart-of-House to ArtScience Museum was already far and as for lunch, we will then ascend to the top floor for Sky on 57. That would also require a long walk heading back to the hotel first. But it’ll be fun and might as well just enjoy it while it lasts! 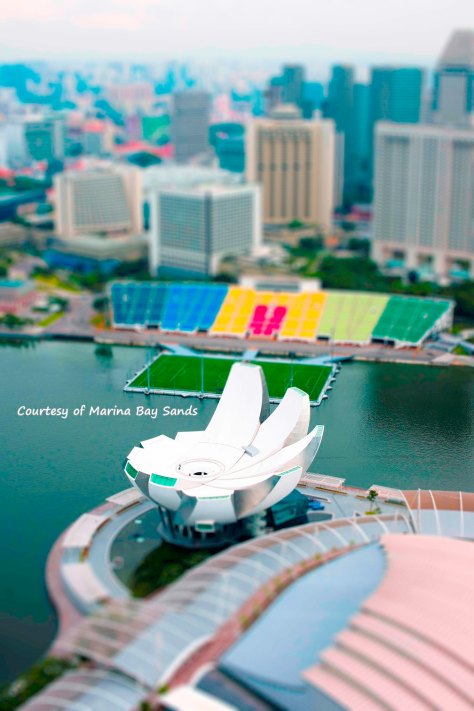 At ArtScience Museum, we all happily took the opportunity to see the exhibition of Andy Warhol’s history and artworks. It took quite a while here as the museum guide was very passionate in telling the details about Andy Warhol. But I enjoyed his works a lot and get a glimpse about his life, the story behind it all, and appreciate more of his qualities – rarely found during his time. Always thought that he’s an Englishman but turns out that he’s an American – well, the last cultured American I suppose. 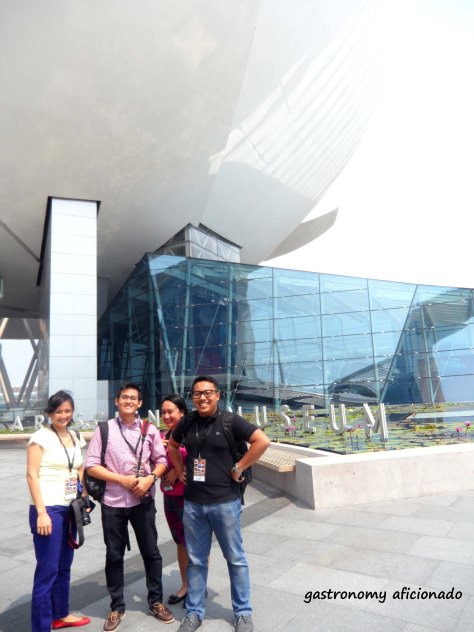 The next exhibition was the Harry Potter! While I might not a real fan of J.K Rowling’s work, but still it’s just interesting to see the exhibits of costumes, wands, and props used during the filmmaking. I get to see the moving paintings (well, in reality they use LCD TV) and the noisy mandrakes as well! Lastly the tour ended at a store full of Harry Potter’s merchandises which I found mostly overrated and overpriced. Still unsatisfied with looking around the exhibits, the PRs already rushed us to assemble and head back upstairs for lunch.