The Haute Cuisine Experience: The Burmese Kitchen Session with Chef Will Meyrick 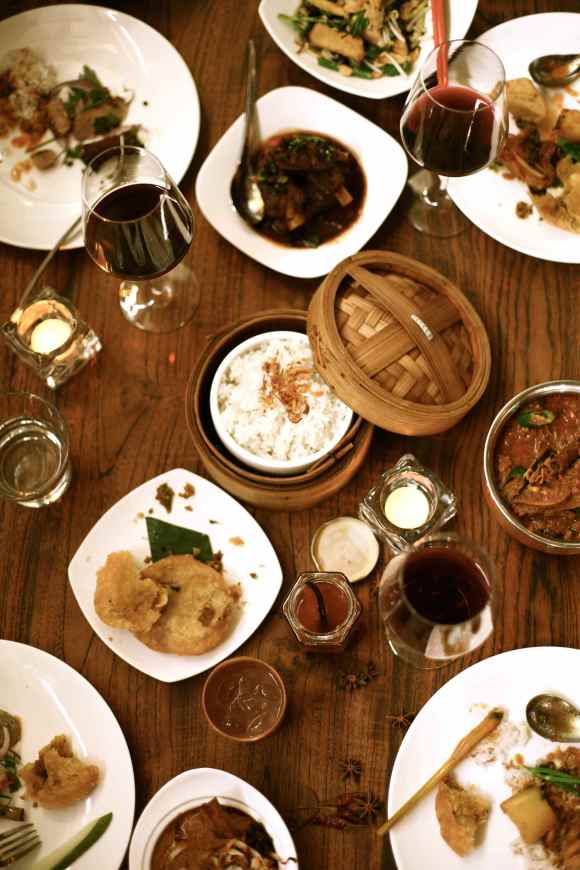 Who doesn’t know Chef Will Meyrick nowadays? He’s the mastermind behind all the mythical culinary excellence of Sarong and Mama San as well as a food adventurer himself. Returning back from Myanmar and amassing newly found local cuisine knowledge, he held another series of Kitchen Sessions at Mama San. I was there to witness his wizardry.

It seemed back then that my planned trip to Bali was overheard by many people including my former colleague back at Time Out Jakarta, Mr Jed Doble. We’ve been working together also to promote a bit about Otel Lobby back then in my blog and this time he hinted me about Mama San’s event as well. Since I was about to go to Bali soon then he gave me an idea to visit establishments under Mr Meyrick’s governance. I thought that day instantly that it’s going to be a very interesting experience and TGA will be moving faster and broader by this particular event.

Hence the day came but not without troubles. My trip organizer mistakenly arranged my trip to start a day after the Mama San invitation but lucky that they can arrange the plane ticket in accord with my needs. Nevertheless, I had to find my own hotel for a night and I was searching for the nearest possible hotel with Mama San. So without further due, here’s the story after my falafel experience.

As we all know, Bali is a land of infinite worldly desires and that attracts tourists or pilgrims of any purpose from all over the world. Over the years, perhaps mostly owing to proximity advantage, legions of Australians enter Bali every day. Some of them reside there for years and working in many professions – being the closest to what I’m doing now would be on journalism, hospitality, and F&B.

Add those facts with ‘lifestyle-refined’ people coming from Jakarta to invest on what they all know about food, fun, and fashion. As a result, many uneducated tourists know Bali as a nation instead of Indonesia! But for many years now, this unique condition created the Bali as what we know right now – rich, vibrant, and full of dynamics. 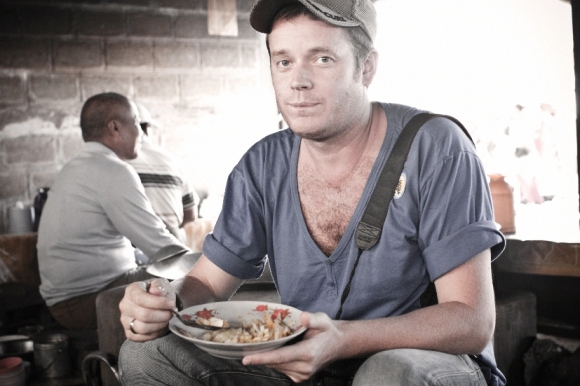 That night as I entered Mama San for the first time in my life, I immediately realized that the impact had become so huge and Mama San appeared more like a leisure den under the shade of foreign embassy – meaning that the patrons are mostly bule! Apart from that, Mama San is dark but beautifully designed and serves as both watering hole and casual dine out establishment, quite different with Sarong. One thing that caught my attention from all was actually a huge painting of a Chinese woman, appears more like a beautiful geisha judging from the place’s name – by the way the terminology of Mama San came from Japanese language meaning the owner of a pub or geisha joint. Additionally, Mama San also decorated herself with plenty of mostly grayscale photos, assumingly from Mr Meyrick’s travels all over the globe.

I headed upstairs for the rendezvous and found the second floor more as a lounge with a live kitchen as the center of the attention. This is where Mr Meyrick usually cooks for the chef’s table. Finally I met Ms Raechel Temily, who’s so kind in taking care all of my needs back at Bali, and several other foreign journalists. Among them to my surprise was a fellow Sundanese food blogger, Mr Bayu Amus (Epicurina Indonesia)! I immersed myself with exciting conversations about the life in Bali and its culinary scene. Personally, it’s a really a different crowd even though I had been to numerous events that involved foreign chefs or them but upon seeing this happen in Bali, it was just enthralling.

Mr Meyrick is a prolific chef that appreciates and learns a lot anywhere he’s at. Currently he’s living in Bali with his Indonesian family and that motivates him a lot to scour all over Indonesia more than most of us do. During his travels, he seeks places that can teach him about the know-how of local cuisine and even stays with the natives for that purpose.

This time he hosted a media dinner to introduce his newly found knowledge acquired during his trip to Myanmar a few months earlier and branded the event as Kitchen Session which will be continuously held especially upon returning from a particularly enlightening trip. 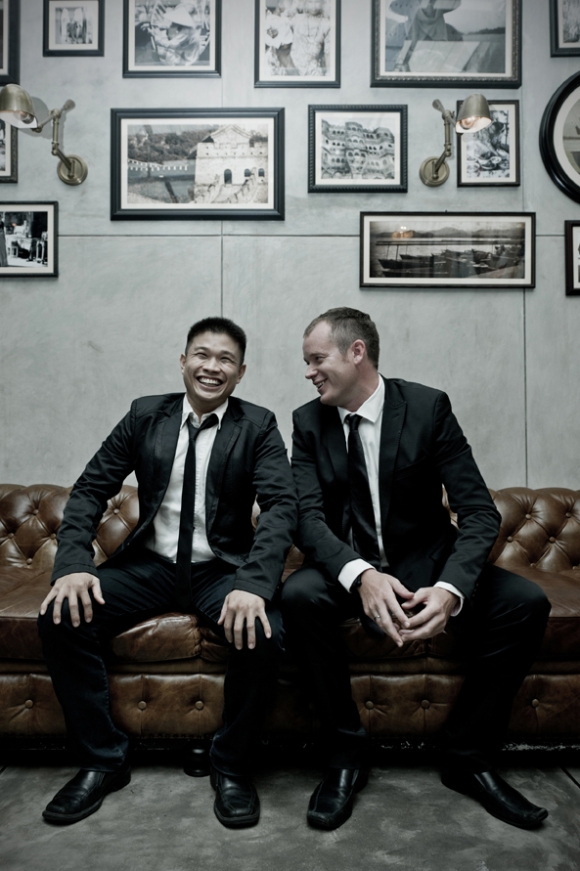 After a warm opener of interesting conversations over some refreshments, we hopped in to the dining table and Mr Meyrick introduced himself alongside his most trusted assistant chef, Mr Palm Amatawet from Thailand. Then off we went for the excitements displayed majestically the whole night!

The first dish was kachooris with mint chutney and yogurt. The kachooris reminds me of Indian’s  samosa or Indonesian’s (probably dated back from colonial times) pastel. But judging easily from the close proximity of India from Myanmar and the fillings, clearly it was influenced from there but blended nicely into a more herb-ish flavoring. A very enticing start from Mr Meyrick aided with the always-there-sidekick to neutralize the thick taste – the kimchi.

More dishes came and took me by surprise that not only Mr Meyrick was very adept in refining these traditional dishes but also miraculously combining each element perfectly. Some of ingredients used were distinctively Asian and rarely seen here. It was a dining experience filled with thrilling rollercoaster ride of heavenly flavors! A commanding presence of sour fresh flavor of snapper mohinga soup that uses coriander and noodle; the black rice cakes that reminds me of ranginang/rengginang savored with interesting chili relish and lalapan a la Mama San alongside duck buns; chicken wings with pickled tea leaves; and a curious combination between soft shell crabs and pennyworth salad. All I did was to sit back and enjoy the glorious dishes, pausing in-betweens with kimchi to clear some heavy after taste. So far it had been a masterful performance of Mr Meyrick and Mr Amatawet.

Well, that was quite a treat right? But not stopping there because more and more kept on coming. A huge crispy carp with coriander, fried shallot, and garam masala which was quite frightening for some people there but I found it very tempting. Within this jungle of temptations, Mr Meyrick also equipped us with roti canai and pilaf rice to combine both the fish and the next alluring dish of duck curry with black pepper, turmeric, chili, and yogurt.

The coup de grace in a form of dessert platter was also keenly prepared and colorfully presented – one of them was the Thai iced tea made into pudding and had a surprisingly very similar taste! Thus that ended the extraordinary feast, a night of its own worth remembering for many many years to come, and a story worth written in thousands of words indeed.

Mr Meyrick was clearly content to see the happy faces and after changing his attire, he mingled with every one of us to share his vision about his ideal version of culinary world in Indonesia. Alongside Mr Amus, we shared our fascinations of his masterful creations that night and I was personally amazed with his wonderful finesse in devising the Burmese cuisine into a modern presentation without leaving the original trace behind. 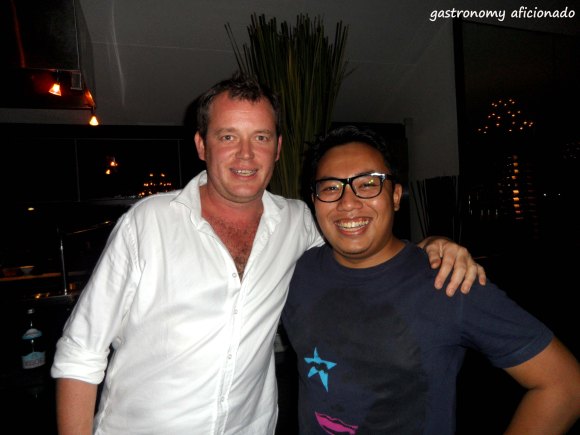 So far I haven’t found somebody as passionate as Mr Meyrick in learning what’s best from Indonesia the way he does. Therein lies the problem, are there any of us Indonesian that passionate enough or aware enough to promote the best of this country has? Many of us proudly learn too much about foreign cuisines and forgetting the nature of Indonesia as the only country that devises thousands of complex, distinctive dishes from huge multicultural backgrounds.

Mr Meyrick told us that there’s always a Malaysian chef for Malaysian dishes, or Thais for Thai cuisine. For him it’s rarely seen in Indonesia a restaurant that supports the growth of Indonesian cuisine capabilities ‘indefinitely’. They’d just hire another foreign chef to dictate again his staffs with foreign cuisines, never leaving them a real chance to demonstrate the best of Indonesia, or moreover to involve them all in a sense of belonging for the place they’re working for. It’s an insight that he asked specifically for me and Mr Amus as bloggers to deliver for our readers.

With that insight, he’s soon ready to takeover Jakarta by the end of 2012 with his groundbreaking restaurant concept that will introduce the pride of Indonesia there. It’s definitely a chance that I wouldn’t miss at all and something that I would proudly tell everyone to try.

It was a long but very enjoyable night filled with magical dishes by the passionate duo of Mama San and Sarong, Mr Meyrick and Mr Amatawet. That night I also told Mr Amatawet that I’d be visiting Sarong in a few days. So, dear readers, another beautiful adventure there will soon be posted here. Afterwards, we all parted ways with a natural contention but also mind clouded with thoughts on how to appreciate food better. It’s not an easy task especially as a writer or even more as a chef, but it’s a message that I have to deliver and I have my entire life to do that wholeheartedly.

-Pictures courtesy of Mama San and Will Meyrick’s personal collections-

5 responses to “The Haute Cuisine Experience: The Burmese Kitchen Session with Chef Will Meyrick”