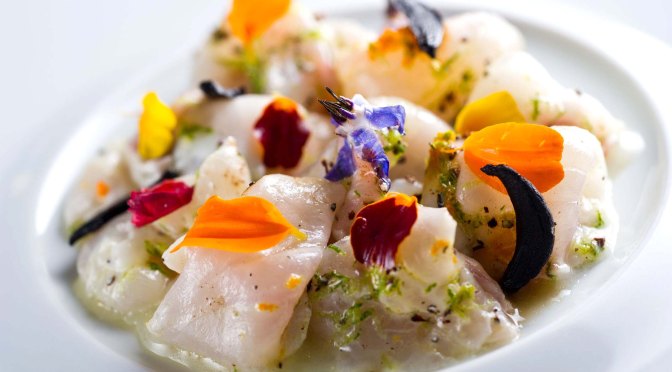 In the wake of globalization era, restaurants from any genre sprung up in Indonesia. Nowadays many of them aware with people’s rising expectations for good dining experience and many of them try their best to keep up the high standard. None so far though has reached the prestigious title of Michelin star aside from keeping up with the ranks of Miele Guide for example, or any other institutions.

I still remember though what Mr Budi Cahyadi, one of the F&B keypersons of Mandarin Oriental Jakarta, said last year, ‘We are bringing the chefs here to raise the bar of the dining standards in Jakarta, hoping that one day we can have our own Michelin-starred restaurants here’.

Truly that’s the vision maintained by this hotel faithfully and so far they have brought four French chefs since last year. As you may have read previously in my posts, the chefs are Chef Nicolas Isnard – who came twice, then Chef Fabien Lefebvre, Chef Jerome Laurent, and the latest is Chef Lionel Levy.

The multilayered dishes as his specialty

At the end of last June, me and a small number of journalists were invited for the introduction of the chef and his dishes. The last I had been to Beaujolais was my first time enjoying the Michelin-starred dishes and it was both thrilling yet full of anxiety. What I really fond from these experiences is that you get to encounter and taste different things every time you meet different chefs and it’s always in a good way. Each chef shows different set of skills, specialties, creations and presentations but the one thing they share in common is their passion.

The appetizer started with a dish called The Crumble. A cold appetizer dish filled with roughly-diced fresh sea bass with twists of lemon, parsley and ginger thus covered in crumbled of almonds baked with caramel. It’s as if you’re in-between the tempting cold play of the ice, the fresh sourness, and the sweetness of the almonds. The fish itself tasted chewy but juicy, small but bountiful. It was clearly appetizing and inspirational.

Secondly, Chef Lionel Levy created the unique Milkshake Bouille-abaisse, his genuine creation once underestimated by people back in Marseille but now said to be worshipped there and becomes his flagship dish for its fame. Bouillabaisse or bouille-abaisse is the town’s traditional soup dish for centuries, now has been heavily modernized, presented like a milkshake with layers, but that of course required techniques and finesse in addition to its fine ingredients.

It was indeed an intricate dish. The first layer consists of potato puree, garlic, saffron and egg yolk. Inside the second layer, there lies the shaken scrambled egg, mascarpone cheese, and a huge chunk of sea bass. He noted this particular layer as his tiramisu jovially. Finally, the uppermost layer is the fish soup. It was a good work for its complexity but the result was also too convoluted for me.

I was a bit puzzled with its heavy note and I need something to dig in more aside from the soup. I figured out later that I need more of the sea bass for a different texture because. Probably on smaller portion, I could easily finish it all and get myself hyped up for more, but unfortunately that was not the case last month. It was a good attempt however, but perhaps a French tongue would settle down with it easier.

Heading for the remaining rounds, we were presented with the main dish of Angus beef. Chef Lionel Levy used many parts, textures, and techniques for this particular dish. Not only that he roasted excellent tenderloin, he also accompanied it beautifully with many delectable partners. The cute Savoy cabbage filled with beef’s cheeks, demiglaced diced tomatoes and olives, the perfect tomato confit with red wine, beef shank chopped and braised in pot au feu as the neutralizer, and finally the Savora mustard for a sour note. It’s again complex but tremendously fulfilling. A little bit of this and that from everything will create a very exciting experience from such a masterful main dish.

For the closure, Chef Lionel was again skillfully layering his dishes and this time a beautiful strawberry tart became the theme. It comprised of sour lemon curd, a nice and soft marshmallow, sweet crumble, fresh strawberries, and topped with delicious and herb-is basil sorbet. It was an excellent coup de grace formula!

It was an interesting lineup performed well by Chef Lionel Levy, a Ducassian and former assistant chef at Spoon in 1998/1999. His Mediterranean style probably derived from his heart’s preference, which clearly belongs in Marseille added with a heritage descended from his Moroccan ancestors. His vision for the future would be to gather and energize the young Marseille chefs, therefore uniting the whole regional gastronomy of this particular area of Southern France. A visit there someday is definitely a must and it will be exciting to see what he unveils next.

Mandarin Oriental Jakarta has again set up a new bar and will most definitely bring again interesting future Michelin-starred chefs soon. According to plan, there will be another two for the remainder of 2012 and it’s going to be another exciting occasion for me. If it’s about passion and creativity, then I am up for the challenge and adventure.

3 thoughts on “The Haute Cuisine Experience: Chef Lionel Levy and His Mediterranean Dreams”