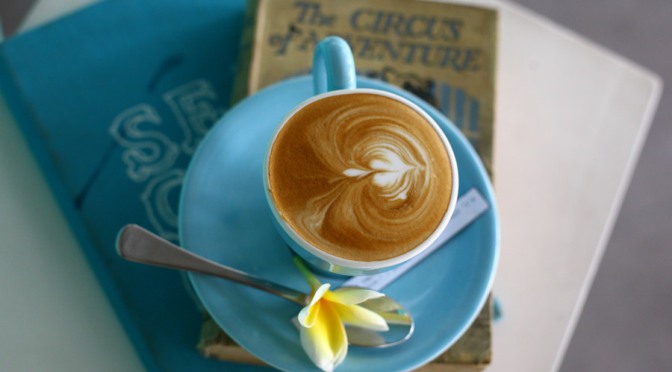 As weird as it may sound, Sea Circus is actually not a parade of dolphins jumping through the fire loops or walruses doing cute stuffs while shrieking like Wookiees. Even if it is a circus, it’s not even located directly by the beach! So, Sea Circus is actually a restaurant, a bar, and most of all for me, a third wave coffee bar.

Sea Circus is conveniently located between the sprawling hotels of Jalan Petitenget and the forever busy Jalan Kayu Aya around Seminyak vicinity. You cannot miss it since it attracts passersby from early morning for brekkie and for late night parties or even weddings! It’s not a huge café but it’s more like a sunny, breezy, and somehow an intimate café with a casual décor but surely not a shabby one. In terms of privacy, they have this separator between the porch, which caters smoking customers but also shelters them from the street with those classic ‘naco’ windows’, and the air-conditioned inner section which appear more laid back and quieter. But make no mistake however because at nights, they open the separator for parties and stuffs, so Sea Circus becomes a lively watering hole in the end!

By the time you came, you’d be greeted with warm smiles from the waitresses. Josh, the owner, is usually around and in time will visit your table and asking how you’re doing. Not only with smiles, the service was also done attentively and most of all, quick. Sea Circus may seem to be your typical santai santai bar but it doesn’t leave a room for bad service. Tables cleared in no time and that happens as well after you finished your drinks or dishes.

After a few miles of walking and searching, at times also in doubt about the direction, exposed to the hot weather, or in short, all those hazardous hardships, finally it’s a rewarding experience! The only downside was probably because we already had our lunch back at Warung Italia which was not bad actually, so with our bellies full then a cuppa would be fancy!

A good friend of mine once promoted this place as a must-visit. He even expressed it in candor as a place that presents ‘orgasmic and majestic black water’. Josh just smiled and said that it was too much for a compliment but by the time I tastes its cappuccino, then I understood completely about what my friend had said.

The cappuccino was presented beautifully with a cute blue cup that goes well with the bluish theme of Sea Circus. Alongside the cup, they usually put a unique quote and a frangipani but unfortunately they forgot to put the flower on mine that time. But that’s okay, since the cappuccino was truly incomparable with any cuppa I had even back at Jakarta. It was not served with a big cup, I have to admit, but the coffee worked well from any angle. Not only that it was born and bred from Kintamani plantation from a special nursery built by coffee experts from 5 Senses but also, they devise their resources well. It was well balanced in acidity, thick, with a hint of nutty flavor, and the velvety foam that tasted like chocolate. I was actually hoping for another cup but then again, one too many would not be good for the curiosity. As always, I keep a good reason to return back again here and definitely for more coffee and Sea Circus’ intriguing dishes.

Before writing this I was even curious enough to study a bit from their website about their bountiful dishes and drinks, the way they present themselves not only as a café but also as a place more than that, and most of all about their program to cultivate their own coffee by cooperating with local farmers. Now that’s the interesting part of third wave coffee based on my study and largely owing to my expert barista friend back at Oh La La Jakarta, Mr Daniel Kauranny.

Everybody at this level is seeking for a higher aspiration in coffee tasting and I found that in most places, coffee is something taken for granted. It’s a waste that these beautiful beads turn into something unworthy or even inedible. Certainly not in Sea Circus, their appreciation for coffee is seemingly immense. Apart from growing their own coffee, they also held this occasional barista championship and other kinds of appreciation. In the end of course, these achievements are dedicated for the patrons and for us, coffee lovers!

It’s a simple equation in the end – a beautiful place, great service, Synesso machine, single origin Kintamani coffee, excellent barista. You know what the answer would be right?

Atmosphere: A sunny, breezy cafe good with quiet afternoons and full of life at nights.

Pictures courtesy of Sea Circus, except for the cappuccino photo