The Haute Cuisine Experience: An Encounter with Chef Nicolas Isnard, The Duke of Burgundy

March. A month that still counts as a fresh start for exciting 2012 culinary adventures and nothing is more tempting than enjoying the wizardry of a Michelin-starred chef, Mr Nicolas Isnard. Again, Mandarin Oriental Jakarta hosted an elaborate, ambitious project of inviting Michelin-starred chefs this year and what’s more intriguing than having the last year’s initial success bringer as a start.

I may call it a sheer luck to be the first to experience these tears of joy but I also happened to miss Mr Isnard’s last year performance. Well nevertheless, I and a handful group of journalists were also those among who had the honor of enjoying such privilege this year. I wouldn’t call myself a hardened veteran with my third time feasting upon Michelin-starred quality dishes. It has always been special and full of surprises. I would even resign myself back to rookie and enjoy it all like a child but with enlightened knowledge about haute cuisine. 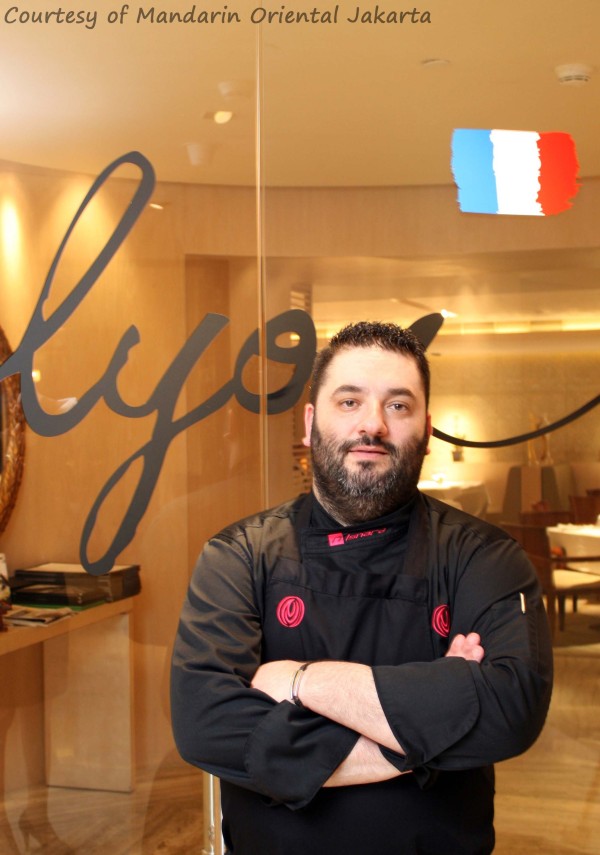 Some people tweeted my experience still asking about what’s the satisfaction of having small-portioned dishes of skyrocketed price. I simply answered that having the honor of appreciating years of immense culinary background and perfection of these chefs is a great pleasure itself, but the pleasure is even greater by experiencing those attributes shown in beautiful dishes like poetry.

Years of tears and joy together with utmost effort and passion combined and put into the tiny bits of intricate details intertwined from appetizer to dessert. Everything is designed to make us feel every wee bit of it without getting full too early from start to finish. That alone is mastery of cuisine but to make everything also tasty and full of happiness? That’s a work of magic.

My first and second experience with honorable chefs Fabien Lefebvre and Jerome Laurent were fruitful encounters as you may already read in my earlier posts somewhere in my blog and at perempuan.com. Now it’s time for Mr Isnard’s French cuisine of 2012!

The tuna and the foie gras

The amuse bouche namely the tuna pizza was a perfect teaser but it’s actually not a pizza as you may imagine. Mr Isnard’s gently seared the tuna in two ways, a quarter done on one side and the other only as far as three fourth, which is known as unilateral. The tuna then put to sleep upon the beautiful bed of a fresh tomato concasse with shallots as the pillow and the blanket. I then resigned myself to a beautiful combination of sauces with characters like pesto, balsamic vinegar, and the one made from rockets, olives, and a twist of lemon. Colorful and fresh, the amuse bouche teased our senses naughtily and we’re getting ready for the foie gras.

Much to my surprise, Mr Isnard presented a huge foie gras on a pot alongside what he called as forgotten vegetables. It’s actually more like garden vegetables like carrot, asparagus, sweet potato, and even orange but the surprise was that the pot filled with an aromatic consommé and alongside a bone marrow. An ‘ointment’ of parsnip and lime was put on the corner of the pot and will infuse itself inside the broth to deliver a fresh, sour taste of the soup. The foie gras was immaculate and fulfilling without doubt. Though eventually, I had this mixed feeling between a surprise and an unaccomplished expectation. To see how Mr Isnard treated the foie gras in a good, strange way was actually great but since it also looked like vegetables soup, it felt also somehow too familiar.

One thing about Chef Nicolas Isnard’s palate that may be different than most of us, his is strictly acidic and that’s what he really likes. I grew up knowing and enjoying more savory stuffs than others while most Indonesian probably like spicy things. It’s a matter of preference but knowing that, I prepared myself to stumble upon sour stuffs and look what I got so far. I feel refreshed all the time!

The cod and the beef

The third course was arguably my favorite. Though the dish appeared simple but let us not too hasty to judge. The Atlantic cod was chosen for this honor and he treated it like a beautiful mademoiselle. Again, he skillfully cooked the cod in unilateral way and then roasted it with low temperature to seal the soul. Thus we were presented with a moist, juicy, and tender masterpiece from Atlantic Ocean.

Like most French chefs nowadays, overseas influences now injected to their dishes and fused. That made the cod swims upon a sea of Asiatic influence of lemongrass sauce and Middle Eastern hummus puree. This alone already made the dish staged in different level of texture and taste but not forgetting his roots, Mr Isnard gave the acidic flavor from kumquat and cherry tomato.

After all the seafood showcase now’s the time for the beef, which probably a bit anticlimactic. The US tenderloin beef was without doubt wonderful but Mr Isnard combined it with the usual BBQ sauce you regularly consume though a bit different. There’s this sweet taste that worked well with the overall sour flavor. Why picked BBQ sauce? Well, once again, his trademark.

The sidekicks were exquisite nonetheless and that would be the artichoke barigoule with gnocchi. I even found the gnocchi very good, which actually a rare occasion for me to come across such thing. Name any gnocchi here in Jakarta and I will vouch only from Mr Isnard ever again or a true Italian cook!

The passion fruit and the au revoir

To close the day, Mr Isnard created a solid cream which I thought earlier to be a sorbet since he used passion fruit but it was also not an ice cream. It’s a texture in-between, almost like a pudding but more subtle. Some of the journalists cannot stand the sourness but actually if you happen to mingle it with the milk chocolate, caramel, Jivara ganache and the chocolate emulsion, you will find it very flavorsome.

It’s a good way to say goodbye though I still pretty much fond more of Mr Laurent’s dessert last year. To note, the Jivara ganache was too troublesome to consume and one of the journalists even had the chocolate emulsion accidentally squirted to his cloth since the ganache was a bit too sturdy for a cut.

Though it’s only a short visit but I know that Mr Isnard may not be around again next year and I might get a chance to visit his restaurant one day in France. His self-styled acidic palate and the unilateral technique had been an enlightening experience for me especially since French cuisine nowadays adopts more and more of Asian and African influence into it. My gratitude also extends for Mandarin Oriental Jakarta for organizing such interesting event and I’m of course, rooting for the next chef!

Who would that be? Stay tune and book when available!

2 responses to “The Haute Cuisine Experience: An Encounter with Chef Nicolas Isnard, The Duke of Burgundy”