As one of the premium brands of Starwood Hotels and Resorts Worldwide, Sheraton has been known in Indonesia for years. One of them is Sheraton Media Hotels and Towers that resides in Mangga Dua vicinity, Northern Jakarta. My last dining experience here was proven to be a wonderful dinner at Sukhothai, so now what about its Chinese comrade Dragon Court?

Sheraton Media never ceases to amaze me with its food promotions. After a wonderful Thai food treat at Sukhothai, now Sheraton Media goes even further with seafood grills at Breeze Cafe and the all-you-can-eat Chinese at Dragon Court. Soon there will be Christmas continued with New Year’s Eve treats as well! Although my trip to reach Sheraton Media was actually quite far but since my previous experience at Sukhothai had been fruitful, there’s no harm at all in it. After all, it’s the passion that counts!

A late lunch! That’s exactly what happened when we reached the hotel around 1.30 pm. Lucky Mr. Mohammad Iqbal, the prolific marketing communication manager of Sheraton Media was kind enough to wait and therefore led us straight to the dragon’s den. Well, you won’t get burn literally here though and it’s even gonna be a good treat/

Once inside, I instantly thought that the best thing about proper Chinese restaurant is to have the rotating tray or known as the so-called Lazy Susan. A dining ‘technology’ dated since the 18th century but she’s still the prima donna indeed and Dragon Court is not short of her presence. 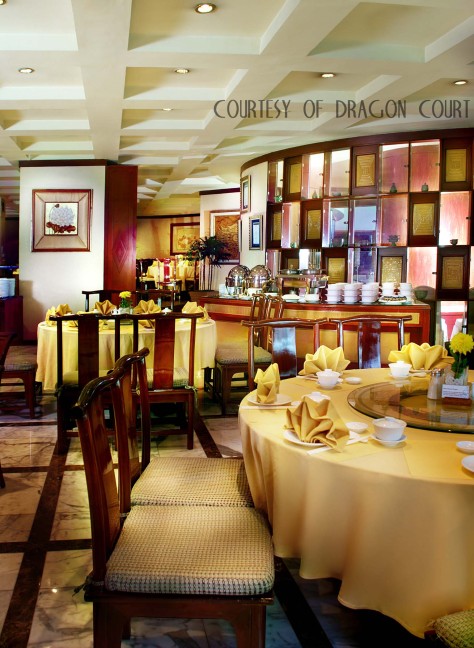 Dragon Court itself looks a bit outdated but still maintains its charms. It can be seen clearly from a not too intimate atmosphere, bright, the use of marble floors, and other typical 90s interior designs. Unfortunately though, it was more like private lunch that time considering the late timing.

At any rate, it’s the food, the company, and the old Lazy Susan that matter. Quickly we browsed through the all-you-can-eat promotional menu where we found A-Z menu from appetizer down to the dessert. Well, it’s not exactly a Chinese dishes encyclopedia on the menu but still fulfilling nevertheless.

For starter, I picked the lo mai kai or visually seen as sticky rice filled with chicken wrapped in lotus leaf. Reminds me a bit about the huge and warm version of lemper or the glutinous version of ba chang. The size was a bit deceiving since consuming too many may result in early fullness no matter how good it is and the stickiness adds the weight.

For the warm liquids, the classic asparagus and crab soup was also a decent choice as an appetizer. Substitutes? Sure thing. Chicken feet dim sum in black pepper sauce, spring rolls, or winter melon soup with mushroom are formidable choices as well.

Moving on to the main dishes. A bit in haste, aren’t we?

Well, as an avid fan of fried rice, the chicken and salted fish fried rice was an excellent pick by Mr. Iqbal. Taking a bit of advantage from my wife’s indifference towards salted fish then it’s up to me to settle the noble task!

The portion was abundant and the taste was also rich. For savory taste lover like me, it was heaven and the fried rice clearly blended itself well with other dishes such as the all-time favorite Kung Pao chicken with dry chilis, stir fried beef with black pepper sauce, and the deep-fried fish fillets with black bean sauce. As for the veggie sidekick, we opted for stir fried comeo with garlic instead the usual broccoli.

To seal the deal, the dark, bleak, and unique guillingao were in for the dessert but it was truly a double-edged sword. While some people are fond of anything bitter like the gourds or even medicines, this guillingao no matter how freshly served cold and poured with honey like crazy, still cannot hide the fact that it’s a bitter taste dessert. It was fun but seriously, you gotta be careful if you’re not up for it. Guillingao itself is some sort of pudding-like dessert said to be made out of a tortoise-shell with herbals. If it’s true, it was a very exotic trip to healthy life then!

Quite a colorful experience I must say but Dragon Court is not without its ups and downs. In all, Sheraton Media can prove itself to be a worthy contender as Northern Jakarta’s prominent hotel but it felt a bit outdated. Sukhothai had been flawlessly delivered such a beautiful moment for me but this comrade here’s a bit shabby in its execution but not without its merits. Tummy fulfilling merits!

Looking forward for more surprises from you then, Sheraton Media!

Ambiance: Ask to lower the Chinese music volume if you and the Lazy Susan’s intimacy are distracted.

Service: Knowledgeable but forgot to tell the halalness of the dishes there.