Crowded and loud, those would be the initial expressions coming from Sabang 16. Lucky enough that the place is quite comfy and air-conned good enough to endure Jakarta’s hot weather and noisy crowd.

Never mind about that for now, it’s time to have a good coffee and snacks. FYI, if your stomach’s growling, best not to rely on the food list. The heaviest meal would be either the toasts or the overpriced Indomie, Indonesia’s pride for instant noodles, topped with boiled egg and meat balls. Well, at the very least you can choose fries and sausages.

The toasts, however, not to be underestimated. The Roti Panggang Srikaya or popularly known as Kaya Toast is a good choice that consist of Two slices of bread of considerable size with butter and kaya, though somehow unconvincing, was actually sweet and fulfilling. While the French Toast (bread dipped in eggs and flavored with maple syrup) is a decent choice accompanied with Dilmah assorted tea and various cuppa coffee from Indonesian beans. An array of selections of Aceh Gayo, Sidikalang, Toraja Kalosi up to Papua Nabire are available at your disposal.

While Sabang 16 successfully boasts its Srikaya Toast, their other jewel named Vietnamese Drip Coffee was somehow different from the one I had in some restaurants or cafe back in Saigon. The ‘original’ version I had back then was milder due to the nature of the Vietnamese coffee beans, sweeter due to the nature of the Vietnamese evaporated milk, and there’s this inexplicable chemistry between them both. At any rate, drop the Vietnam thing and just enjoy the dripping coffee. It’s decent nonetheless. 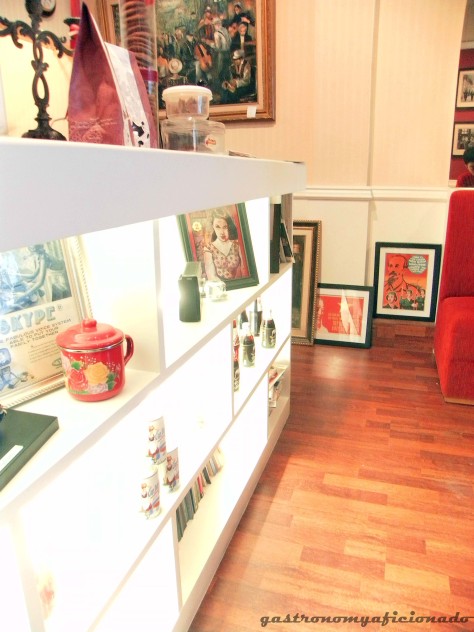 Still hungry? I bet you are, but don’t hesitate to order the fried Chicken Wings. It’s honey dipped and golden fried, so it’s the whole package of mild sweetness and savory though perhaps you’d still want to dip them all up in chili sauce. A portion of six of them would beat your hunger a bit. So how about you add it with a side dish of a small glass filled with two half-boiled chicken eggs? It’s one of traditional hawker’s dishes with similar menu like Sabang 16 has. Just add a pinch or more salt and pepper to wrap it all up nicely, shake it up, and enjoy it.

Aside from all of those coffee and traditional hawkers delights, one of the owners of Sabang 16 also brings Badak, the Indonesian ‘Root Beer’ coming from Siantar in North Sumatera. It tasted almost the same with the original Root Beer but with a more soothing flavor, less soda, and still, it’s good and refreshing.

So joining the almost same path (but less adventurous) like its famous counterpart next door (Kopitiam Oey), Sabang 16 at least promotes cleaner and definitely better version from its hawker offsprings with the same menu, rich coffee selections, indigenous drinks, all for a bit expensive but still within the reasonable level of pricing.

Jalan Sabang has always been the center of food hawkers. Though recently dwindling since the flood prevention and road constructions thanks to the DKI Jakarta governor, nonetheless some business still bravely stood against the wind and this time, the fledgling Sabang 16 starts successfully in its endeavor.