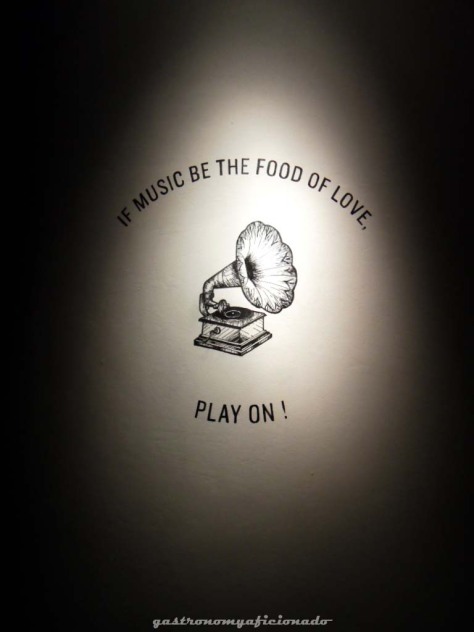 Tin Pan Alley is the latest cool addition to the growing family of stylish bistros in Central Jakarta and it’s inconspicuously located inside a new office premise of Thamrin Nine Podium/UOB Plaza.

The restaurant successfully revives old American era of musicians that goes with the same name circa 1920s where inside you’ll see an old telephone, a gramophone, stained mirrors, classic tiles, and white bricks that resembles the early 20th century American industrial era completed with drawings of old working class flats with gridiron emergency stairs. The lightings are comfortably soft and that went harmoniously well with the jazzy tunes. It’s just perfect for a romantic dinner scene especially when there were not too many patrons around and that would be during weekdays.

The genre itself is American dish with some influences from Mexican, Italian and Cajun. Starting from the familiar Western style breakfast dishes up to salads and soups, burgers and sandwiches, pasta dishes, and the mains where mostly deal with grills, pan sears, and roasts.

In the morning, you may want to deal with their all-day breakfast dishes which mostly involving the affairs between eggs, tuna, salmon, and croissants and even in dinnertime plenty of choices are available for appetizers but the sound of the good old finger licking delicious chicken wings served in abundance and with three choices of sauce such as the barbeque sauce, garlic cheese sauce, and the sour yet spicy sauce they called Red Devil Buffalo was just too good to be true. And dear oh dear, what a marvel! The chicken wings were fried to perfection, battered proportionally, and most of all the meat all tender and savory. Just dip the chicken in the barbeque sauce and you wouldn’t want to add anything else because it was just perfect like a match made in heaven.

When it gets serious, I chose the Italian heritage menu and this time it’s neither the usual spaghetti nor penne but I put my bet on their macaroni and cheese. It’s a hot bowl full of baked macaroni with creamy yellow cheddar cheese and many bits of bacons in-betweens. You can feel the weight by just imagining it, looking at it and then my fears came to worst. So no matter how delectable it might be with all the savory cheese, good macaroni and the copious bacon bits, the base was just too oily and the thickness of everything inside the dish will sap your appetite away before even getting into the dessert.

Instead of lingering and giving up to the fate, I shifted right away to the barramundi dish, said to have been one of the stars of the show from the roast and grill department. The 170 grams pan seared sea bass was just fresh but a bit chewy. If you happen to not familiar with pan seared fish, it might not be a good first encounter but nonetheless it tasted quite okay. Although the key to the goodness of it lies at the fresh papaya mango salsa sauce seasoned with lemon juice and beautified with raisins, poured over the fish. This created a sweet but refreshing taste making it not boring or too ‘fishy’. The dish was also accompanied finely by savory potato wedges and mixed salad thus saving the fish from total disappointment.

At times you might want to just hang out and have a leisure time sipping a cup of Illy coffee or the infused lemonades with various fresh fruits while also enjoying light meals and the live music in Tin Pan Alley. The food may require some improvements but the atmosphere was just too perfect to be missed by not having a good time with your significant others or friendly office colleagues. So team up with your besties and have a good time once in a while at this fine joint.