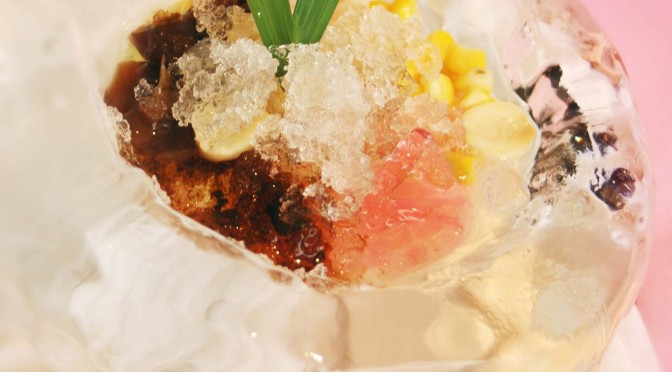 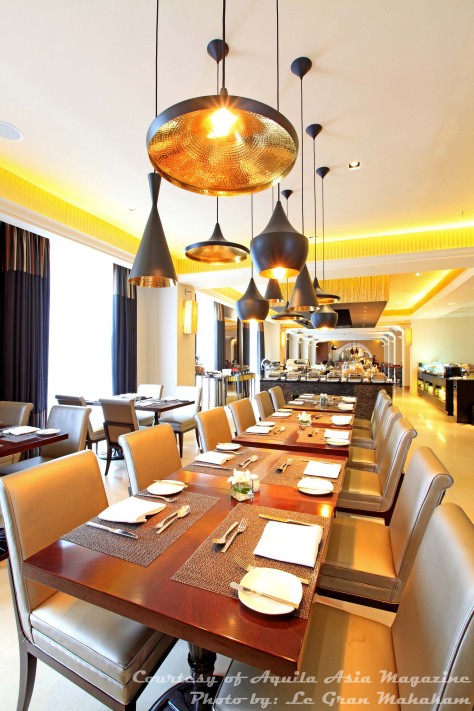 Gran Mahakam Hotel is a beautifully designed hotel located conveniently in-between the classy neighborhood of Southern Jakarta and the hustle bustle of Central Jakarta’s business districts. But instead of starring as another modernist heralds, Gran Mahakam rather sees itself as the envoy of classic European architecture from baroque influence with all its ornamental details.

Its international restaurant, Le Gran Café, has a dashing look of mixture between classical and modern, mostly from the West but with a little bit of Oriental touch as well. The use of Onyx stones as the decorations for the wall lamps create the elegance. Next, the blending between wooden parquet and marble flooring, yet also some Asian touch of colored bamboo in the ceilings of the buffet again create a warm atmosphere and the homey kind of feeling.

Without doubt the venue itself is very decent and comfortable, but how about the food? It turns out that Le Gran Café offers a wide array of delightful choices from Japanese, Western, Peranakan, and Indonesian.

I must remark one thing among all these goodness and that credit goes for the beef satay. The beef satay is clearly standing out among the crowd and definitely deserves standing ovation! The meat itself was already made mild, succulent, and to add the spiciness, they put some chili on top of it. What’s driven the beef satay to be that insanely delicious was definitely the secret recipe which I have no doubt that some people who don’t fancy eating satay will be most definitely leave that all behind and embrace the new life after tasting Le Gran Mahakam’s version.

Hey, we even haven’t reached the buffet and the desserts!

For Japanese, there’s always the sushi and sashimi counter alongside the Western salads with colorful vegetables and dressings. Quite unusual also to see fish grills available from dory, gindara and snapper with julienned vegetables. Side-by-side with the fish is the roast lamb carving and its barbeque sauce. Not only that, the envoy from Singapore would be the steam boat and some peranakan influenced dish such as the tasty and spicy roast duck with black pepper sauce. Not forgetting also that the homemade pasta station is always there for you to pick. I admit that their aglio olio pasta is probably one of the best I’ve ever tasted and it doesn’t need an Italian to do the trick. Just make it more meaty, cheesy, or spicier according to your liking. Simply, add life into it!

So if you’re done with the mains, it’s time for the dessert! The best would be the Chocolate Melted with homemade ice cream, preferably vanilla ice cream. The chocolate melted is a warm dessert made from a cake with chocolate filling, melting out of it when you sliced through and with some almonds for topping. The superb taste of the sinful chocolate combined lethally with the righteous vanilla ice cream. Yet the good news is that it’s available every day from breakfast to dinner due to its popularity.

Alternatively, you can always choose the unique Lotus Mahakam for a cold dessert. Experience the content of a huge carved ice with wondrous fillings such as lotus seeds, longans, lychee, baby corns, and olives all soaked in the lychee-fragrant and sweetened water.

Ultimately, it’s one helluva trip and a joyful ride all day long. My next stop here would be probably for Ramadhan Iftar. They have the already famous very vast array of Iftar openers. So next would be my turn again to see what they really offer me for Ramadhan. As for you, better not wait any longer. Book your seats and get on that rollercoaster ride of joy!

Delivery Availability: Dine in only.

Halal Meter: Halal, no pork dishes at all.

Vegetarian Friendly: Plenty of choices since it’s an international buffet and since it’s a hotel, just ask about it and they’ll be gladly to assist your vegetarian needs.

Alive and well, up and running.

It’s my very own domain.

Been thinking about this a lot and it’s as easy as clicking the mouse here and there. Won’t take more than 5 minutes but in reality it’s been months I’ve been planning about this but hey, it’s done anyway!

So please welcome  http://gastronomy-aficionado.com to your bookmarks. The old address is still available of course.

Thanks a lot and see you soon! ;D

Like Loading...
Finally, a contribution for a foreign in-flight magazine about Jakarta! Quoted at the Hear Say section of the magazine alongside other fellow writers and contributors. Thanks for the opportunity, Cebu Pacific!
—–

“Since Indonesia has a lot of cuisines, it’s better to introduce yourself to them at restaurants that serve the diversity under one roof. I recommend Rempah Rempah (restorempahrempah.com) where you can choose delectable dishes fromPadang, Betawi, Sunda, Java, Bali and as far as Manado.”

In case you’re not aware, well.. this baby of mine has now reached her 30,000th hits just yesterday! Yihaaa~!

It’s a significant increase since the 20,000th hit last February and started this website actually 2 years ago also in February.

Anyway, I decided to make some fresh changes which will be announced later. As for now, I just want to thank you all for being a loyal patron of my website and my meaningful adventures. I will strive to continue my writings and to share my experiences and thoughts with you all.

What’s Cooking? is the title of a wonderful event held recently at @america last April. What’s @america by the way? Oh, it’s actually a high-tech American cultural center that promotes USA education and youth interests yet serves as a venue for many social gatherings or hearings.

Fast forwarding to the event, the USDA (US Dept. of Agriculture) established a some sort of committee named as USDA Council of Chefs of Indonesia. Why? Thanks to the lucrative exports of American produce to Indonesia, the USDA decided to honor Indonesia by appointing Indonesian chefs to be trained in USA and to also promote the awareness of American agricultural products. The chefs will be carefully selected, well-trained, and familiar with US food products and with local/regional cuisine.

The group consists of four chefs, clustered into four specialties and will undergo the training in USA after promoting the cause. The selection process has been completed and the four chefs are mostly the TV personality we often see daily.

The first one is Mr. Edwin Lau representing the Healthy Cuisine. Chef Edwin Lau is probably the one we see very often these days. Apart from a famous instant noodle commercial, he’s also hosting several shows such as the most famous one of his in Metro TV or any other of his shows about healthy food. Started his career from the prestigious Ritz Carlton Bali and continued it to Grand Hyatt Jakarta. Not just a celebrity chef, he’s also a restaurant consultant, nutrition & fitness coach, model, the already mentioned TV host, and also an author.

The second chef is Mr. Haryanto Makmoer as the USDA Council of Chefs for Baking. A seasoned cavalier in baking from his thorough participation local and internationally starting from Jakarta, Bangkok, Paris, Taipei, several cities in China, Manila, and Singapore. Aside from his showing in both electronic and print medias, he’s also an accomplished lecturer in several culinary schools and a baking consultant.

The third one is somebody who can be easily recognized from his physical stature and his frequent appearances in media as well. He’s Mr. Muchtar Alamsyah or known as Chef Tatang and represents the USDA Council of Chefs for Hot Kitchen. Experience spans for more than 22 years and recognized as an expert in kitchen operations starting from menu planning, staffing, purchasing, and administration. He’s a frequent guest in culinary shows and currently enjoys his status as celebrity chef. Needless to say, his expertise has been put into use local and global.

The fourth is the USDA Council of Chefs for Pastry and this one is represented by a female chef. Yes, it’s Ms. Ucu Sawitri. She’s probably the first who’s ever tasted the education at CIA. No, not that CIA but it’s the Culinary Institute of America in New York. Her background came from being a lecturer and currently also hosting and co-hosting several TV shows. She also opens cooking classes at her home from making pastry, bread, chocolate, and traditional snacks.

Enough introduction don’t you think? Yes, their future endeavor will be representing the USDA agenda in Indonesia and also undergoing the education in CIA New York. What about the food they served in What’s Cooking? Well, it was one show that brings everybody together and it was fun too. Seeing people with curious eyes looking at what they’re cooking, hearing about what they’re doing in front of us, conversing with everyone, baking, frying, and so on forth.

Their cooking mainly used American produces. Apple, pears, raisins, and potatoes all made into special recipes. Starting with Chef Edwin Lau who created this Drunken Potato. Basically he’s making marinated potato wedges with beef ragout made from cooked beef and bacon with sautéed Portobello, jalapeños, and raisins poured ultimately with cheddar cheese sauce and served with tortilla chips as well. Why name it Drunken Potato? It’s because Chef Edwin uses beer in the ragout ‘concoctions’. Now that’s the kind of savory food I’d really prefer for my leisure time over cool drinks and good movies!

Chef Haryanto Makmoer from the Baking division created this Pear Pizza using pears of course, apricots, and pistachios resulting in a very good taste of sweet pizza, almost feel like a pie actually but it did hit me with the strength and mildness at the same time! Now that’s the sweet version over cool drinks and good movies!

While Chef Tatang devised Chicken Roll. That sounds too simple but Chef Tatang prepared it with careful precisions since some of the process required skills. So to make it sound simpler, it’s actually roasted chicken filled with turkey bacon and covered with mixture of apple, raisins, and pistachios all rolled over like you see in Japanese restaurants when they’re making maki. The chicken roll then cut evenly and then to be served with mashed potato alongside diced dragon fruits and apricots. Well well, that’s indeed something new and worth to see.

The last but not the least was the creation of Chef Ucu. It’s called Apple & Raisin Upside Down Slices. It’s the delicious mixture of the basics such as milk and cinnamon, eggs, Sunmaid raisins, red cherries, and Granny Smith’s apples and to be baked later. The result was an indulging treat for family. Feels almost like Thanksgiving. I just don’t know why I said that but that certainly expresses what I had felt about the dish!

So from this moment, I salute the chefs and wish them well in their endeavors for promoting both American products but also to combine them all with the local, proud taste of Indonesia. Let’s wait to hear more about their experiences abroad and in near future, the next generation of Council of Chefs! That might be you all right!