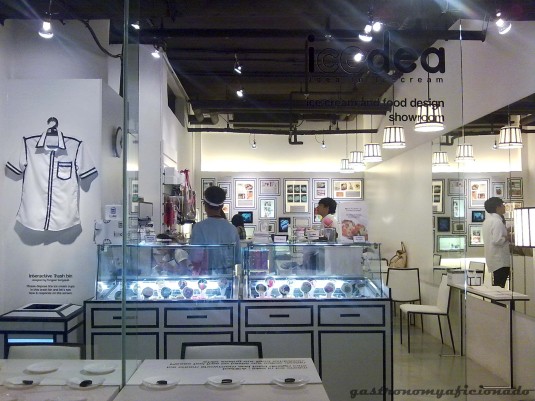 Icedea is an interesting ice cream parlor theme created by a local ice cream designer that goes with the name Prima Chakrabandhu Na Ayudhya. Icedea’s idea is ‘Idea in Ice Cream’, so in short the company’s not only opens stores for itself but also provides the idea in ice cream parlor concept and flavors for any investors. Waw.. Ideas all over one sentence! Well, I suppose so but do correct me if I’m wrong about Icedea.

So just across Tea, my new favorite coffee shop in BACC, there lies Icedea with its eccentric appearance of tables separated with glass. Not only that, there were also small plates and Oreo divided with the glass. What’s that for? God knows, but it’s funny nonetheless. They got also this interactive trash bin with TV on the side of it. In it, a guy looks above as if looking for something, but if you trash something in it… well.. I shouldn’t be tell the spoiler but again it’s funny. So you’d better come to Bangkok just to see it! Well.. actually for the ice cream though!

Although under the threats of flu, in which my wife had succumbed to it, I decided to just not let this opportunity slips away. Indeed, Icedea offers interesting flavors for its products. Flavors such as Tokyo Banana, Global Warming, Caramel Latte, Earl Grey Tea, or just the usual flavors and some even in Thai language are available. After some sampling on Tokyo Banana and Caramel Latte which ended up not to well for my taste, I decided to pick Toffee Nut instead.

A generous one scoop only costs around THB 60. The Toffee Nut flavor was rich and nutty of course. The milky texture and some caramel in it were those among that gonna make your day! I was forced to finish the ice cream since she had a flu but I was happy. All the fatigues just fade away. The ice cream parlor also attracts foreigner visitors, partly of course thanks to the direct access to BTS station. 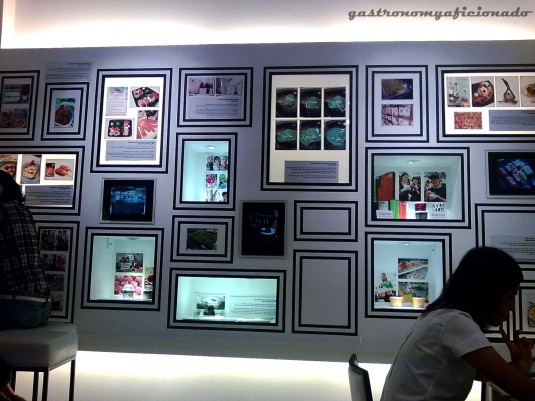 So in the end, I got the flu. Even if I already got sick that day, I’d be a very curious boy and would still against mama’s or doctor’s order even for just a scoop of ice cream and becomes happy! ^^